Team Bath Netball will get their 2016 Vitality Superleague campaign under way against defending champions Surrey Storm during a ground-breaking Super Saturday event featuring all eight franchises.

Four matches – all televised live on Sky Sports – will be played during an action-packed day at The NEC in Birmingham on Saturday, January 30, culminating in the prime-time showdown between five-time Superleague champions Team Bath and the current title holders (8pm).

It won’t be the first time that Team Bath and Surrey Storm meet during the next few months – they are also competing in a triangular tournament with Hertfordshire Mavericks, last season’s Superleague runners-up, at the University of Bath on Saturday, November 14.

Director of Netball Jess Thirlby, who has reformed her coaching partnership with Anna Stembridge, said the tri-tournament and Super Saturday had ramped up the excitement levels in the countdown to the new season.

“Super Saturday is such a pioneering event and it is fitting that we get to take on last season’s champions in the prime-time slot,” she said of the event that was instigated by Team Bath.

“It is great that England Netball is marking the start of a new Superleague season in such an innovative and exciting way, and we are looking forward to playing a prominent role in what should be a memorable occasion.

“Before then, we have a wonderful curtain-raiser to the new season in the tri-tournament, here at the University of Bath, which will give fans an early chance to see some of the Superleague’s best players in action.”

Tickets will go on general sale at 11am on Friday, September 25, priced from £22 to £32 for adults and £16 to £24 for children. For more information, visit the Team Bath ticketline.

Team Bath – backed by estate agents Carter Jonas and based at the University of Bath – also face two more of last season’s semi-finalists during the opening weeks of the Vitality Superleague season.

They will travel to the EiS in Sheffield on Monday, February 1 to face Yorkshire Jets, Stacey Francis’s new club, before welcoming Manchester Thunder – Superleague champions in 2014 – to the Sports Training Village on Friday, February 12.

The Blue and Gold also have home matches against Team Northumbria, Hertfordshire Mavericks and Loughborough Lightning during the first half of the season.

Family tickets – with entry for two adults and two children or one adult and three children – are priced at £28 and there is a buy ten, get one free group discount for each game.

This season, in a new initiative, every ticket buyer will receive a match-day programme to the value of £3.50 free of charge with their ticket.

Tickets are also now on sale for the tri-tournament featuring Team Bath, Storm and Mavericks – the first chance to see the top players in action since the Netball World Cup in Australia.

Wales’ Chelsea Lewis was one of the stars of that tournament and will be making her first appearance in blue and gold following her switch from Celtic Dragons. Other eye-catching new arrivals will be announced in the coming weeks.

It will be the third year running that Team Bath, Storm and Mavericks have met in the pre-season tournament but the first time it has taken place at the University of Bath.

“We are proud to be bringing this eagerly-anticipated event to the Sports Training Village – it is a dress rehearsal for the Superleague in every sense,” said Thirlby.  “With three of the league’s top teams in action, all of whom have won the title, it will be as big a stage as any of our home matches this season and is fantastic value for the fans. They will not only get to see our new-look squad tested against top-class opposition but it is also the chance to welcome Anna back to Team Bath.”

Tickets are priced £10 for adults, £7 concessions and £28 for families. There is also an early-bird half-price discount offer for anyone who buys a Superleague season ticket by Friday, October 23.

To purchase Vitality Superleague or tri-tournament tickets or for more information, visit the Team Bath ticket line  or call 0844 888 4412. 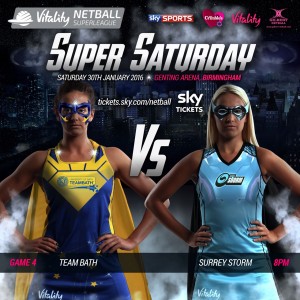 Report courtesy of the Team Bath press office at Matchtight