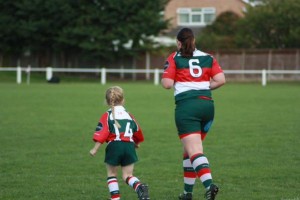 This is always a hard game as the travel can impact teams. However, the travel did not seem to hinder Novocastrians as you could tell by the enthusiasm in their warm-up, that they were up for a strong and challenging game. However, with a fifty first consecutive win in the balance, Waterloo Ladies were always going to come out strong. Additionally, Firwood Waterloo Ladies had the extra boost of mascot Isobelle Smith who plays for Waterloo Under 7’s who lead the team out with Captain Rachael Thomas to do the coin toss.

The first half was a one-sided game in the favour of Waterloo who put thirty eight points past Novos, with the opposition yet to score. Substitutions were made throughout the game, welcoming on the pitch new faces in Rachel Porter, and old faces in Amanda Hughes, Ashleigh Neale, Ellie Huckle and Derren Whalley. The second half of the match was tough and challenging for both sides, with Novos managing to score twice, and Waterloo only adding to their score line slightly. However Waterloo Ladies were victorious, extending their consecutive league wins to fifty one. The final score of the game was 43 – 12.

Match honours were given to Emma Hutchinson, being awarded ‘Forward of the Match’, Ashleigh Neale with ‘Back of the Match’, and Rebecca Owen receiving ‘Player of the Match’ which was awarded by Isobelle Smith, the mascot.