Richmond Women continued their bright start to the season, making it two wins from two in their first home league game of the season. Richmond started the game slowly, with strong scrumming, but several handling errors saw them struggling to defend their own try line. DMP took advantage and scored ten minutes in from a line-break on Richmond’s 22, which was successfully converted, bringing the score to 7-0. 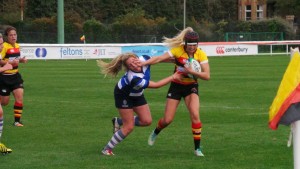 Richmond responded by kicking their game up a gear, and five minutes later Vik Cornborough storms through several defenders, before offloading to Alicia McComish, who scores Richmond’s first try, bringing the score to 7-7.

A great series of runs and offloads, including fancy footwork from Emma Croker, put Richmond in a strong position, and ten minutes later they are ready to score again. This time Holly Myers gets the try, after a fast sprint down the wing. 12-7.

By this time Richmond’s handling has massively improved, allowing individuals to make an impact, such as Laura Kapo, who cannonballs through the defensive line, and Jackie Shiels, who dances past numerous defenders. Alicia McComish scores again, 17-7.

Vik Cornborough and Jackie Shiels make more fantastic breaks, and Emma Croker shows that hookers can use footwork just as well as the backs. After a series of ‘pick and go’s from the forwards, Richmond’s try is held up, and the whistle blows for half time.

The second half begins, and Richmond decide to make their mark. Chloe Edwards and Anna Caplice cut several impressive lines, positioning their team in the opposition’s twenty-two. Sam McCarthy picks the ball from the back of a scrum, and scores under the posts. Jackie Shiels converts, making the score 24-7.

Three more tries follow in quick succession, the second of which is impressively converted by Jackie Shiels from the edge of the pitch. The score is now 41-7.

DMP kick off, and Anna Caplice catches the ball, before running twenty metres, and then kicking it, thereby taking Richmond five metres away from the opposition try line. The ball is shipped from one side of the pitch to the other, and Holly Myers scores on the wing. 46-7.

DMP kick off again, and this time Oli Davies catches the ball, on the run. She makes a lot of ground, and some fantastic link play results in another try for Richmond. 51-7.

Richmond almost score again, when Anna Caplice takes the ball from a scrum on the halfway line. After an impressive run, she offloads to Holly Myers, who reaches the try line, but is held up. The ball is shipped to the opposite corner, and this time finds ground, bringing the score to 56-7.

One last try brings the final score to an impressive 61-7, and leaves Richmond victorious. The bonus point win puts them top of the Premiership table.