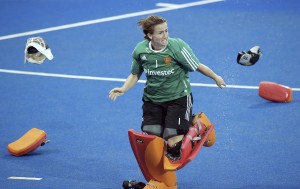 A sensational goalkeeping display from England’s Maddie Hinch helped Danny Kerry’s side to a famous win in the final of the Unibet EuroHockey Championships. Caia van Maasakker had given the Dutch a two-goal lead via two penalty corners, but late goals from Sophie Bray and Lily Owsley took the game to a shootout. Hinch saved three times in the shootout and England were victorious, picking up the trophy for the first time since 1991.

The Dutch were the quicker of the two sides to settle, winning a penalty corner in the third minute. Caia van Maasakker took the shot but Maddie Hinch got down well to make the save to her right. With England under pressure, Xan de Waard played Eva de Goede in but Hinch got out well to block it. Alex Danson was first to threaten for the hosts, picking the ball up in the right and showing the defence a clean pair of heels before forcing Joyce Sombroek into action for the first time.

At the start of the second quarter the Netherlands had a glorious chance to open the scoring. Ginella Zerbo found herself clean through but Hinch got enough on the ball to divert the shot round the post. England were defending superbly and then on the counter they won a penalty corner eight minutes before the break. The slip left to Laura Unsworth was the option but Holland were able to charge the shot down and clear. Sjoerd Marijne’s team continued to push forwards and won another penalty corner before the break. Van Maasakker’s shot took a deflection but Hinch readjusted and made a stunning save to her right. Another corner was awarded but again, the England goalkeeper thwarted Van Maassakker.

Right at the start of the second half Naomi Van As glided into the circle on the right but her shot was seen off by the England goalkeeper who was being kept busy. She pulled off another fine save from a penalty corner with England’s defence pouncing on the rebound to clear the danger. A lovely patient move from Danny Kerry’s side set up their best chance of the quarter. They worked the ball into Danson inside the circle. Her instant turn and shot was superbly saved by Sombroek diving to her right.

England’s brave resistance was finally broken with five minutes left in the quarter. Van Maasakker got the better of Hinch from a penalty corner that found the net via a defender’s stick. The Dutch doubled their lead three minutes later and it was a second for Van Maasakker. Her fierce penalty corner beat the goalkeeper to her left with pace and precision.

Margot van Geffen picked up a yellow card in the opening exchanges of the final quarter and England made the extra player count, winning a penalty corner. They worked a complicated move and although Sombroek saved Kate Richardson-Walsh’s shot, Bray dug the ball out and forced it over the line to give Danny Kerry’s side a glimmer of hope. Hinch made an incredible double save from the next Netherlands penalty corner, keeping her side in the contest with a miraculous piece of athleticism. England drew level two minutes later. Another well worked penalty corner did the trick and Owsley was on hand to guide the ball over the line, setting up a grandstand finish to the delight of the crowd. With no further goals, the game went into a shootout. 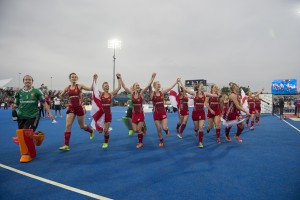 Helen Richardson-Walsh went first and was fouled by Sombroek. She took the resultant penalty stroke herself and scored. Hinch then saved from Willemijn Bos to keep it 1-0. Danson kept her cool to slot home the second and Hinch denied Lidweij Welten to put England in a strong position. Bray converted hers and Ellen Hoog got Netherlands on the board. Although Sombroek saved from Georgie Twigg, Eva De Goede was unable to beat Hinch and England were crowned champions.

Tickets to the Final of the Women’s Champions Trophy 2016 are now on sale. Tickets to other sessions will go on sale soon, once the schedule is finalised.

This world-class event is being held 18-26 June, at Lee Valley Hockey and Tennis Centre and will feature the GB women’s team, the Netherlands, the USA, plus three more teams who are still fighting for qualification. See the likes of Netherlands captain and Olympic gold medallist Maartje Paumen, the USA star Katie O’Donnell and Great Britain’s Alex Danson in action. Visit www.greatbritainhockey.co.uk/gbtickets.

Georgie Twigg: “I’m still in shock to be honest. I can’t quite believe it. What a fantastic day!”

“When we went 2-0 down we looked at each other and we knew what we had to do. We don’t train day in, day out to go down without a fight. The belief we have is incredible and will take us far in this next year. Once the first goal went in I knew we could do it. As soon as it went to shootout, we had a lot of confidence.”
“The first corner goal was a special routine we haven’t used before in a match. We practice them to try and score when it matters and that’s what happened.”

“We sat and watched the Dutch shootouts yesterday and with Maddie Hinch in goal we are always very confident. We’ve had a lot of practice, we executed well when we took them and Maddie did what she does, it was brilliant.”

“It’s been an incredible tournament. When we went 2-0 down the crowd lifted us. It’s been a really special event. Playing at the Olympic legacy venue and getting a gold medal, it doesn’t get much more special than that.”

The Unibet EuroHockey Championships 2015 showcases the best eight men’s and women’s teams in Europe, including both England teams. The event will offer entertainment both on and off the pitch with a large fan park, including a fun zone for children. The stadium capacity has been expanded to cater for demand for tickets, with some sessions on the verge of selling out again at the increased capacity. The tournament is one of UK Sport’s National Lottery funded events as part of the #EveryRoadtoRio series. You can find out more at www.uksport.gov.uk/events.