With a team of high potential players the Under 17 girls set out to embark on an exciting season. They ended the season last year with a runner’s up medal and set out to go one better in 2015! T20 aside the girls went unbeaten all season. They racked up some big scores with some excellent performances with both bat & ball.

Both the semi-final and final were huge tests of their team work and they stepped up to the mark. Early wickets meant the middle and lower order needed to make sure they had a total to try to defend. For both days early wickets with the ball changed the games quickly. In the final taking regular wickets by keeping the fielding tight, bowling dot balls and taking some excellent run out chances meant that the Red Rose fielding and bowling out classed the Warwickshire girls and although the girls felt they were short with the bat they got over the line to win by 59 runs in a low scoring game.

Jen Laycock, LCB’s Women & Girls CDO, said: “It’s a great achievement for this group of girls, they have worked very hard to get to this position, many sacrificing a lot to be part of this team. Even the distraction of many receiving their GCSE results on the morning of the semi-final, the team still pulled together as a unit and scrapped for that win. This group of girls have made lifelong friends with each other, developed as cricketers and as people through their journey in age group cricket. I hope that we see many of these girls pushing for places in the LCB Thunder squad and ultimately England Women in years to come.” 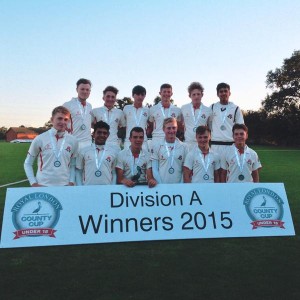 5 days later the scene was set at Kibworth CC in Leicestershire, when on Wednesday 26 August LCB’s Under 15 Boys took on Surrey, defending champions, in the final of the Royal London U15s Boys County Cup Division A competition.

Following heavy overnight rain a later start and reduced overs game of 45 overs commenced. Lancs won the toss and as the pitch had dried considerably they decided to bat first.

The early overs were difficult to face with the ball seaming around and the odd one stopping in the pitch when it hit a damp patch. However, Joe Halstead hit three fours in his total of 14 which gave Lancs some confidence for later in the innings.

Unfortunately, wickets fell at regular intervals with Lancashire struggling at 40 for 4. It was at this stage that George Lavelle was joined by Brad Fielding and for the first time this season Lavelle was overshadowed by the exciting batting of Brad Fielding. On his return to the side Brad hit an excellent 54 with two sixes and five fours. George helping out at the other end they took the game away from the stunned Surrey side with a partnership of 98 before Brad was run out. Lavelle, however carried on in his normal style of mixing quick singles with clinical hitting to amass a brilliant 98 before being caught behind two short of his century. He was ably helped by another good innings from Charlie Dewhurst 41. Lancashire finished on 267 for 9 from their 45 overs. A great score in these conditions.

Surrey began their chase in the worst possible way when their opener Boys was hit on the elbow by Lewis Pearson in the first over and had to leave the field Retired Hurt. They never recovered from that incident and were soon 99 for 4 with all the Lancs seamers bowling accurate spells on a still helpful wicket. Lewis Dove had two good days at the Finals and finished with figures of 7-0-32-2, this together with a spell of 5 -0-23-2 from Joe Halstead stifled any last minute hopes Surrey had of victory. They were well behind the required rate for most of their innings and ended on 176 for 9 off 39.3 overs.

A comfortable win for LCB County Boys U15s showing their dominance in this competition throughout the season with them playing 11 games and remaining unbeaten.

Stephen Titchard, LCB’s Performance Manager and Head Coach for U15s, said: “For a group of players to play with this level of consistency, skill and belief in their talent has been outstanding. Winning 8 group matches plus the 3 final stages is a tremendous achievement. They have been led well by the captain George Lavelle and everyone in the team has played their part in winning the Royal London U15 County Cup National Competition, which proved to be a fantastic experience over the 2 days at Kibworth CC. For this group of players to back up the achievement of last year’s U17 boys team that won their competition, as well as this year’s U14 boys team who won 7 out of 8 Royal London County Cup matches this season can only be good for our system and ultimately the Lancashire County Cricket Club in the future.”

Additional success was also had this year as the LCB Thunder side won the NatWest Women’s County T20 Division 2 Title. They remained unbeaten throughout the season in their 8 games and head to Division 1 in 2016.

Bobby Denning, Managing Director for the LCB, said: “It’s great to see success like this within our Performance Department, which is charged to identify and develop talent at all levels and to develop players in a winning environment. It is testament to the Department’s staff, Team Managers, Coaching Staff and most importantly the players across these teams. The win and promotion by LCB Thunder demonstrates our pathways are working from grassroots to the county arena and I wish them every success in Division 1 for 2016.”

The Lancashire Cricket Board is grateful to the LCCC Foundation (www.lcccfoundation.co.uk) for supporting its County Age Group programme, without which some of this success would not be possible.

Report courtesy of the Lancashire Cricket Board