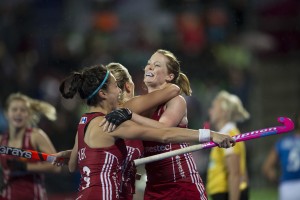 An inspired display by Italy goalkeeper Martina Chirico and some superb defending by the Azzurri proved to be in vain as Helen Richardson-Walsh’s 25th goal for England and a late goal from Nicola White gave England a 2-0 win. Richardson-Walsh struck with 15 minutes remaining and then White secured the win with a last-minute goal. Danny Kerry’s side made it two wins from two in the pool stage and booked their place in the semi-finals.

England started brightly and Sophie Bray was first to threaten. Her persistence paid off as she robbed the Italian defender and forced Martina Chirico into an early save. The Italy goalkeeper was then called upon twice in quick succession to deny Ashleigh Ball. England won their first penalty corner with three minutes left in the quarter but Chirico was at it again, making a fine save from Giselle Ansley who she denied again from another set piece moments later. A driving run by Susannah Townsend set up Alex Danson but the No15’s snap shot went the wrong side of the post, ensuring it was 0-0 at quarter time.

Italy enjoyed a spell of possession in the second quarter but it was England who fashioned the better chances. Danson’s turn and shot flashed just wide as the hosts hunted the opening goal. Bray too went close but Italy’s stubborn resistance was frustrating Danny Kerry’s team.

With less than two minutes to half time, England won a penalty corner. Italy asked for a referral but the decision stood. Ansley took the shot again but her effort whistled past the post leaving it level at the half time break.

Italy’s rigid and organised defence looked like it would keep England out in the third quarter but a bit of magic from Lily Owsley won them a penalty corner with two minutes left on the clock. The move was slick and the deflection hit a foot on the line resulting in a penalty stroke. Danson stepped up but her effort went wide to the disbelief of the crowd.

With the time ticking down to the end of the quarter Georgie Twigg broke forwards and played the ball into the circle. Although Italy seemed set to clear Bray’s determination kept the chance alive and Helen Richardson-Walsh was on hand to stab the ball in from close range. 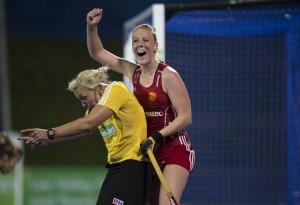 Danson did brilliantly to break the line and get into the Italian circle in the final quarter but was left to rue the woodwork as her bullet strike cannoned back off the post. Italy took off Chirico and went to 11 outfield players but a yellow card to Giuliana Ruggieri straight after, curbed their attacking intent. England took advantage and with no goalkeeper White forced home from close range to secure the win.

England’s next match is against Germany on 26 August at 19:30 live on the BBC Red Button and the BBC Sport Website

Susie Gilbert, England: “We always knew they’d give us a tough challenge and we would need to be on form to get the win. It took us a while to break them down but it was great that we kept to our processes, kept going and eventually it paid dividends. The mental challenge when a game goes like that is to not get anxious and to stick to your game plan and processes. We kept doing what we do and believed in the plans we had in place. We knew if we stuck to our strengths we’d get there, which we did.”

“Germany are a class outfit and we know they have skilful players so we’ll have to be on it. We have a day to recover and prepare before we give it our all against Germany. It’s exciting to be in the business end of a tournament we’re glad to being the semi-finals but we’re not getting ahead of ourselves. We will concentrate on Germany, aim to get the win and keep the momentum going. It’s an old cliché but we have to take it one game at a time.”

The Unibet EuroHockey Championships 2015 showcases the best eight men’s and women’s teams in Europe, including both England teams. The event will offer entertainment both on and off the pitch with a large fan park, including a fun zone for children. The stadium capacity has been expanded to cater for demand for tickets, with some sessions on the verge of selling out again at the increased capacity. The tournament is one of UK Sport’s National Lottery funded events as part of the #EveryRoadtoRio series. You can find out more at www.uksport.gov.uk/events.