The England Roses claimed a place in the 2015 Netball World Cup semi-finals after toughing out a 62-46 win against South Africa in Sydney this morning. In their final Pool F match, only the winner would remain in medal contention and although England are ranked three places higher than the Proteas, it was far from plain sailing at the Allphones Arena.

Tracey Neville kept faith in the same starting line-up that took to the court in a convincing victory over Wales yesterday and despite a sluggish start, they gradually asserted themselves to book a last four encounter, likely to be against former World Champions, New Zealand. 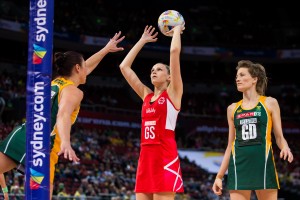 The match started well for the Roses with Jo Harten finding her range, nailing an exquisite mid-range attempt for the opening goal of the match. A Sonia Mkoloma pick-up looked to have England in control early on. It wasn’t to be converted and back came South Africa. Four goals in a row had the Proteas ahead and it took excellent pressure from the defensive unit for England to regain their composure.

The Roses responded with six unanswered goals of their own and the nerves started to settle. The England defence were on top and Harten was combining well with Helen Housby to push the first quarter lead out to 16-8.

Experienced shooter Pamela Cookey was introduced for the second quarter, replacing Housby. The physicality increased with the vice-captain and Tamsin Greenway both victims of late contact, the former requiring a blood injury time-out after taking a blow to her mouth.

England remained resilient and determined to increase their lead, the Mkoloma and Beckford-Chambers combination were winning plenty of ball and were unlucky to see a number of tips fall to South African hands.

This allowed the Proteas to remain within touching distance and towards the end of the half they were producing their own inventive attacking plays to make the result far from certain. Heading into half-time, the Roses held a 32-21 lead. 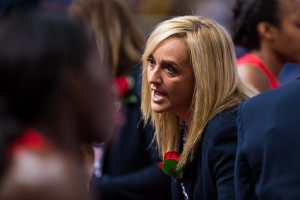 Changes were made at the interval with Sara Bayman, Geva Mentor and Stacey Francis all taking to the court. The new defensive duo linked superbly to disrupt the African shooters and claim an early turnover. Three goals in quick succession moved England further clear.

However, Norma Plummer has added some fire to the Proteas and they refused to roll over. At one stage the gap was 16, but with a couple of penalty calls going against the Roses in the final third, they started to be reeled back in. A late miss in the quarter from Harten was followed by a whistle beating attempt from the Proteas attack as they won the quarter and reduced the deficit, 46-36 with a semi-final spot still in the balance.

Re-introductions were made by Mkoloma and Housby for the final fifteen minutes as England attempted to settle the contest.

Barring a couple of converted turnovers, the final quarter remained on centre-pass and the advantage stayed at ten goals heading into the closing stages. With five minutes to go and South Africa desperately pushing, England capitalised. Bayman was spotting the wonderful movement in the shooting circle and Serena Guthrie was producing her usual, spectacular array of intercepts.

As the match entered its final minute, Housby somehow clung onto a ball that floated a couple of feet above her head. Harten applied the finish and with it finally sealed the Roses passage into the semi-final.