Pace bowler Ellyse Perry bagged six wickets as Australia beat England by 161 runs in the Kia Women’s Test in Canterbury and claim a six-point lead in this year’s Ashes series. The 24-year-old right-armer claimed Test-best figures of 6-32 as England were dismissed for 101 inside 59.1 overs at the Spitfire Ground, St Lawrence.

Having been set a victory target of 263 from 89 overs – which would have been a women’s world-record pursuit – England’s tough task became harder after the loss of two wickets in six balls just prior to lunch.

Opening bat Heather Knight departed lbw after pushing outside the line of a Sarah Coyte in-swinger, then Sarah Taylor bagged a pair when dragging a lavish drive against Perry onto her off stump to make it 12 for two.

Home captain Charlotte Edwards then survived a huge second-ball appeal for leg-before by Perry as she and her side reached lunch in trouble on 16 for two after 10 overs. England’s struggles increased when Edwards chased the first ball of the mid-session from Perry to edge to the keeper.

Having occupied the crease for 73 minutes, Lauren Winfield’s innings of 12 ended when, in aiming a whip to leg, she missed out to depart lbw to Megan Schutt.

Two runs later, Natalie Sciver pushed outside off at a near yorker-length ball from Schutt to edge to Alyssa Healy behind the timbers and leave England on 29 for five.

Sixth-wicket partners Lydia Greenway and Test debutant Georgia Elwiss stalled Australia’s progress with a stoic 32-over partnership worth 51 as England reached tea on 76 for five.

But the hosts collapsed thereafter, losing their last five wickets for 23 runs in the space of 61 deliveries.

Having faced 137 balls for her plucky 16, Greenway misjudged a Perry bouncer, ducking low only to see the ball brush past her shoulder and peg back leg stump.

Laura Marsh went right back on her wickets to Perry’s next delivery, a leg-cutter that rocked off stump, to leave her with a pair and England struggling on 90 for seven. 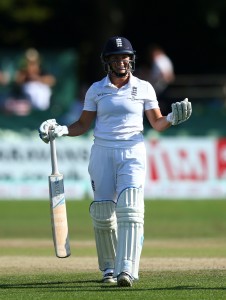 CANTERBURY, ENGLAND – AUGUST 14: Katherine Brunt of England reacts after being given out to Ellyse Perry  (Photo by Dan Mullan/Getty Images for ECB)

Katherine Brunt, England’s first innings top-scorer, reached six before she was sent packing by umpire Alex Wharf for a catch behind the stumps when hooking. Replays showed the delivery had grazed the helmet, rather than gloves or bat, and the dismissal gave Perry a five-wicket haul, (sadly one of many terrible decisions during this test).

Having batted two-and-a-quarter hours Elwiss was just four short of a maiden Test fifty when she chipped a low full-toss to mid-on to gift Perry her sixth wicket, then Coyte pinned Anya Shrubsole leg-before to complete victory with almost 30 overs to spare.

The final day had started with an eager batting display by Australia’s fifth-wicket pairing of Jess Jonassen and Alex Blackwell, who wasted little time in adding a further 66 runs to set England a mammoth run-chase.

The tourists’ positive start began when Jonassen pulled a Knight full-toss to the ropes at midwicket to reach her second half-century of the match from 63 balls, with five fours and a six.

Nine deliveries later the left-hander drove to Greenway at mid-off, but she had become only the eighth Australian to score 50 in each innings of an Ashes Test and had contributed 54 to a fifth-wicket stand of 92 in 160 balls.

Healy was bowled soon afterwards when attempting to reverse sweep Knight, sparking the Australia declaration that left Blackwell unbeaten on 47.

Australia women won the toss and elected to bat