Jess Jonassen struck an unbeaten 95 to rescue Australia and lift them to 268 for eight after Anya Shrubsole shone for England with the ball on day one of the Kia Women’s Ashes Test.

Shrubsole ran through the Australia top order at The Spitfire Ground, St Lawrence, picking four wickets by tea, while Laura Marsh added 2-42 of her own in 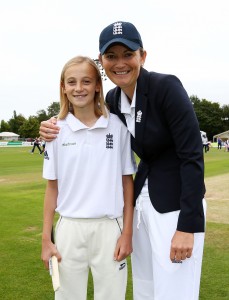 CANTERBURY, ENGLAND – AUGUST 11: Charlotte Edwards, Captain of England poses with match mascot Rachel Stevens prior to the start of play .

what was a commanding England display until the final session.

The Australians had to rely on a 77-run stand between Jonassen and Alyssa Healy, after being 99 for five at one stage. Jonassen, who struck 10 fours, then joined in a late half-century partnership with Kristen Beams, who also reached stumps unbeaten on 24.

England are bidding to win all four points on offer in the Test, and they are currently 4-2 down in the multi-format Women’s Ashes. On today’s performance, though, Charlotte Edwards’ team have the game required to get ahead.

In helpful conditions at Canterbury, Shrubsole made impeccable use of the movement on offer to trouble Elyse Villani and Nicole Bolton, another long-format debutant.

The batters slowly built a foundation as Villani emphatically pulled Georgia Elwiss, handed her England Test cap before play, for four through mid-wicket. However, Shrubsole would get her reward as the right-handed Villani, when on 33, edged to slip where Heather Knight took a sharp catch.

One quickly brought two shortly before lunch as skipper Meg Lanning fell for three to the same combination of Shrubsole-Knight in an almost carbon-copy of Villani’s dismissal.

At the restart Shrubsole wasted little time, striking in just the second over after lunch with Bolton bowled superbly for 36, and a fourth wicket came in Ellyse Perry, who attempted to defend but could only loop bat-pad to wicketkeeper Sarah Taylor.

Katherine Brunt had plugged away all morning and an Alex Blackwell lbw was her reward though England had a moment of concern when Shrubsole was forced off the field with ankle trouble.

At 99 for five, Jonassen showed some much-needed aggression for Australia with some classy drives through the covers. She was joined by Healy, the niece of former Australia men’s star Ian, and the pair had to be patient for their runs.

Marsh kept things in check and nearly had a wicket before tea when Kate Cross put down a diving chance at point off Healy. Not much was lost though, as Marsh trapped Healy lbw for 39 shortly after the players re-emerged, ending the 77-run stand which had taken 21.3 overs.

Jonassen got to her half-century with a four off Cross, but the bowler then made amends for her drop by having Sarah Coyte caught behind for three.

England began crowding the bat at this stage as Australia got to 200 in the 70th over, and the aggression paid dividends as Megan Schutt was trapped lbw trying to play away a Marsh delivery.

With the new ball taken, survival was on the agenda under floodlights, but Jonassen managed to frustrate England’s bowlers, with Marsh guilty of a dropped catch when Beams lofted over mid-off.

It was the kind of fortune that allowed Australia to end on a high, as Beams and Jonassen reached the close of play having stretched their partnership to 62.