Rampant Reading are eager to keep banging in the goals in FA WSL 2, according to Nikki Watts, after they eased to victory at Oxford United. Reading maintained their FA WSL2 title push with an emphatic 4-0 victory at Abingdon FC.

Lauren Bruton’s pass found Ward, who hit the bottom right corner after 14 minutes and only a fine save from Hannah Cox denied Ward in the 22nd minute 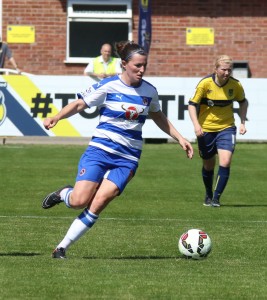 Oxford threatened, with new signing Destiney Toussaint bright in attack, but they could not handle the movement of Reading’s front three.

Watts had time and space in the box to convert the second after Bruton’s through ball and Ward then fed full-back Jane who lifted over Cox in the 41st minute. Cox made a reaction save from Nia Jones in the 51st minute and the goalkeeper blocked well from Watts after Emma Follis’ pass two minutes later.

However, she could do nothing in the 59th minute as Follis turned and chipped into the net to make it 4-0 after a scramble. Kayleigh Hines’ free-kick was pushed onto the bar by Grace Moloney in the 65th minute and the rebound was nodded wide by Helen King with the goal gaping.

Nikki Watts was among the scorers at Abingdon, her first since returning to the club, and with Doncaster two points ahead and still to come on the fixture list, the striker knows Reading’s fate is in their own hands in the FA Women’s Super League with BT Sport.

“We wanted to get three points of course, but we wanted to score a few goals as well because it could come down to goal difference at the end of the season,” said Watts. “We probably should have had a few more towards the end, but overall it was a good performance and we are happy with the three points. A 4-0 win away from home sends out a good statement.” 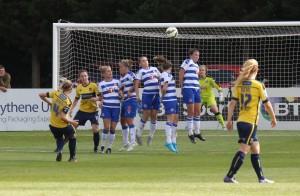 “Oxford had a lot of the ball in our half at times in the first half, but every time we attacked I thought we could score. I am really enjoying it and it’s a good team to be a part of.”

“We were 3-0 down at half-time mainly due to simple mistakes, which is frustrating,” said Oxford defender Rosie Lane. “We dealt with their movement better in the second half. Hannah Cox has done well in goal, as she has for the last few games, and Destiney Toussaint did really well up front, battling, making good runs and chasing down. We already have more points than we finished on last season so we know we have done a lot better. We now have Birmingham City and Notts County in the cup with no pressure so we can go out there and hopefully get something out of the games.”