England set up a Tuesday morning clash against hosts and reigning world champions Australia after a crushing 85-34 victory over Samoa today.

A world record crowd of over 16,000 netball fans had packed out the Allphones Arena earlier in the day as New Zealand shocked the Diamonds with a 52-47 win and in doing so clinched top spot in Pool A.

Because of this result, a Roses success would see them enter the second group stage alongside the team ranked number one in the world. England duly delivered a dominant performance to make the potential become reality.

After a hard fought win against Jamaica yesterday, Tracey Neville tinkered with her starting seven as her side were faced with an easier fixture against a much 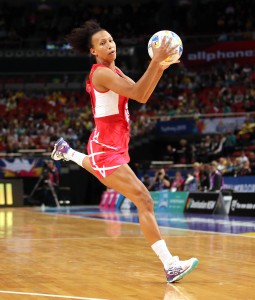 lower ranked opponent. The gap in class between the nations was soon apparent with England controlling the tempo and using their pace to create space through the court.

An attacking combination of Helen Housby and Pamela Cookey were feasting on easy chances as the Roses moved into an early 12-1 lead.

Serena Guthrie was switched to WA but proved to be as effective in this position as she defended well from the attacking third to allow England to push the score out to 22-4 after the opening fifteen minutes.

It was more of the same in the second quarter with the Roses defence in complete control. Geva Mentor and Sonia Mkoloma have over 220 appearances between them and they used all of their experience to quieten the Samoa attack.

Being deployed at WD was Stacey Francis and she displayed her athletic ability with several fierce drives in the mid-court. At half-time the score had moved to 43-10.

As expected, a host of changes were made at the break with only Sara Bayman retaining her starting position.

The new line-up struggled into gear and with a sympathetic crowd supporting Samoa, the team in blue started to show some of their class. Extra impetus in the attacking third saw them stay with England for much of the quarter.

Coupled with a stuttering quarter in the attacking third for the Roses, Samoa had managed to limit the damage and trailed 61-24 heading into the final fifteen minutes.

With a point to prove, the same seven remained on court and they responded brilliantly. Jo Harten was shooting on sight and managed to find the target with a flurry of long range attempts.

Bayman was working from circle to circle and putting her body on the line despite the result already being a certainty. It was a professional display from a team who demands the best at all times.

At the final whistle, focus was immediately switched to the challenge that lies ahead in the next group stage.

The other two nations joining England and Australia in Pool F are yet to be decided. It is very likely to be South Africa and the winner of a crunch match between Uganda and Wales which is to be played tomorrow.

Monday sees England take their first scheduled rest day of the tournament. Following a brutal three days of action and with the prospect of the Diamonds ahead, it comes at the perfect time.