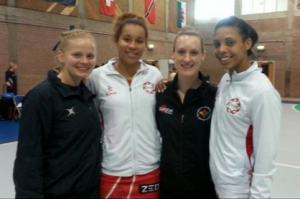 Francis came on at wing-defence for the third quarter of England’s 60-19 victory over a Scotland side featuring club colleague Claire Brownie.

Serena Guthrie, who captained Team Bath in the Superleague in 2014 before moving to New Zealand to play for SKYCITY Mystics in the ANZ Championship, was among the stand-out Roses players.

The 2015 ANZ best new talent covered the court at remarkable speed, stealing possession in one breath before helping move the ball into the shooting circle in the next as England pulled clear in the final quarter.

It was the ideal warm-up for Saturday’s Pool B clash with Jamaica, who beat England to the bronze medal at the Glasgow 2014 Commonwealth Games.

They started their World Cup campaign with a 90-44 victory over Samoa and whoever wins Saturday’s clash – being televised live on Sky Sports 5 from 8.15am BST – is likely to top the group.

Jones, meanwhile, helped Wales make an “awesome start” to their World Cup by recording a 59-52 victory over Fiji in Pool D.

Trailing 16-13 at the end of the first quarter, Wales produced a storming second period to set up a win which puts them on course for qualification for the First Eight phase of the competition.

“Awesome team performance today,” tweeted Jones, who will next be in action against Zambia – beaten 74-38 by Uganda in their opening game – on Sunday

Loughborough’s Briggs to take up coaching role in Tasmania.

International teams to return to Lee Valley in 2021.