A familiar foe lies in wait of the England Roses as they continue their Netball World Cup campaign against Jamaica on Saturday morning. This pivotal Pool B encounter will see England take on a side that they have struggled to contain in recent times.

A heart breaking loss in the 2014 Commonwealth Games bronze medal play-off was followed by a 2-1 Series defeat to the Sunshine Girls in Kingston earlier this year.

Ranked just one place behind the Roses at 4th in the world, Jamaica have an array of well-known stars that will guarantee a fierce challenge for supremacy in the Pool. 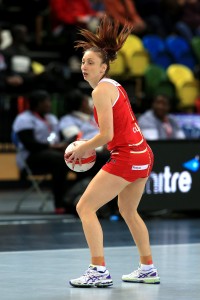 Turning her attention to the contest ahead, England centurion Jade Clarke said “This year we hit the top teams quite soon so it will be nice to see where we’re at.

“You always want to get on court against Jamaica. The last time we beat them was away and it was a 2-1 Series win to them so we are definitely out for revenge. We’ve watched a lot of them on video, we’ve got a really strong game plan so it’s about sticking to that. In training we’ve been working incredibly hard so we’re just looking for a great performance on Saturday.”

There will be several dangers for the Roses and Clarke has picked out a familiar name to keep an eye on, she said “Romelda Aiken, who has had a great ANZ season, it’s all about stopping her. We always say it doesn’t just start with keepers, it starts all the way down the court so you’ll see some great through court defensive pressure from us.”

The England mid-courter is aware how big this early encounter is, she added: “You want to be at the top the whole way through and it starts with playing against Jamaica. You want to top that group and you want to top the next group. We want to be in the best possible shape for the semi-finals and to get into that final for the first time.”

The last time these two sides met at a World Cup was in the bronze medal play-off during the 2011 edition in Singapore. On that occasion England triumphed, clinching a comprehensive 70-49 victory.

England versus Jamaica will be shown live exclusively on Sky Sports 5 from 8:15am. Non-subscribers can also see matches without a contract through online streaming service NOW TV.

By purchasing a Sky Sports Day Pass for £6.99 or Sky Sports Week Pass for £10.99, you can enjoy access to all seven Sky Sports channels and watch on a TV with a NOW TV Box or on a range of devices.