The England and Wales Cricket Board (ECB) today announced the England women’s squad for the standalone Kia Women’s Ashes Test match, which is due to get underway at the Spitfire Ground, St Lawrence (Canterbury) next Tuesday (11th – 14th August). 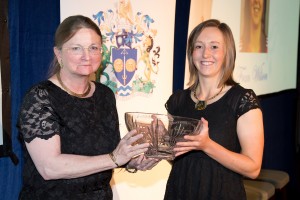 Fran Wilson receiving her 2014 Sports Personality of the Year award from Professor Dame Glynis Breakwell, Vice-Chancellor of the University of Bath by Mervyn Clingan – Taking Pictures

Kent and England women’s captain Charlotte Edwards will be hoping that the support of a home crowd during an extended 164th Canterbury Cricket Week will help to give England the edge in the four-day clash, as Australia currently lead the Women’s Ashes series four points to two, following the conclusion of the three Royal London One-Day Internationals.

“We have selected Fran Wilson as a straight swap for Amy Jones within the Test squad.  Fran has been in excellent form with the bat for club and county this summer, and in particular has put in a couple of notable performances for the England Women’s Academy against the Australians during the 50-over and 2-day warm up matches.”

“There is no denying that the result of the Kia Women’s Test next week will go a long way to determining the overall outcome of this Women’s Ashes contest.  The series is currently well poised with Australia holding a narrow two point advantage after the Royal London ODIs, but we have a very strong recent Test record against them, and this is certainly something that we will take into the match next week.”

University of Bath graduate Wilson has previously played for Bath CC, Somerset CCC, MCC Young Cricketers and England A. She has also played for the senior England team in one-day and T20 internationals, including the 2011 Ashes series in Australia.  A multi-talented sportswoman, Wilson captained the University of Bath women’s football 1st XI and was voted as the University’s Sports Personality of the Year at the 2014 Blues Awards.

England will be looking to replicate their heroic performance in the last Women’s Ashes Test match at the WACA in 2014, when they secured a memorable 61 run victory on the final day.

For the first time in the history of television broadcast, by covering the Kia Women’s Ashes Test match, Sky Sports will provide live ball-by-ball coverage of a women’s Test match.  BBC Radio will also broadcast live radio commentary of every ball of the match.