England women’s captain Charlotte Edwards has said that her side will be quick to look ahead to the Kia Women’s Test match in Canterbury next month (11-14th August), after Australia won the third and final Royal London ODI between the two sides in Worcester.

The result today means that Australia won the Royal London ODI series 2-1, securing four Women’s Ashes points, with England on two points after their four wicket victory in the opening match in Taunton. 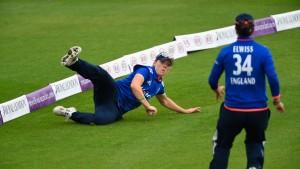 Source: Gerry Images for the ECB

Heather Knight dives to save a boundary

The three Royal London ODIs also carried additional significance for both teams, as the matches formed England and Australia’s third round of fixtures in the ICC Women’s Championship – the ongoing qualifying tournament for the 2017 ICC Women’s World Cup in England.  With two points awarded for a win, England secured just two points against Australia, moving them into fourth place in the ICC Women’s Championship table on 9 points overall.  Australia remain at the top of the table on 16 points, having added four points to their tally during this series.

“It is always disappointing to lose, but there are a lot of positives that we can take away from these opening three matches of this Women’s Ashes series.  We started brilliantly on Tuesday in Taunton, demonstrating the intensity, standard and brand of cricket that we want to play.  Unfortunately we have been a bit inconsistent and ultimately outplayed during the last two matches and Australia have shown why they are the current world champions in this format.”

“We now have a few days off to re-charge, before joining back up as a squad at the National Cricket Performance Centre in Loughborough to prepare for the Kia Women’s Test match.  We love playing Test cricket – it is a format that suits our style, and we will of course be looking to come back strongly.  With four points on offer to the winner of the Test, this Women’s Ashes series is still wide open – there is a long way to go yet.”

“We are also in a comfortable place in the ICC Women’s Championship table after this block of matches.  With four more rounds to play in this qualifying tournament next year, I am confident that we are well positioned at this stage.”

The Kia Women’s Test match between England and Australia will be played at the Spitfire Ground, St Lawrence (Canterbury) from Tuesday 11th to Friday 14th August.  Four points will be awarded to the winner of the Test match and two points will be awarded to each side in the event of a draw.  For the first time in the history of television broadcast, Sky Sports will provide live ball-by-ball coverage of the Kia Women’s Test match.

England will be looking to replicate their heroic performance in the last Women’s Ashes Test at the WACA in 2014, when they secured a memorable 61 run victory on the final day.

In 2016, England will play the remaining four rounds of their ICC Women’s Championship campaign, taking on South Africa, West Indies and Sri Lanka away from home, alongside hosting Pakistan next summer.

The ICC Women’s Championship (ICC WC) involves the top eight ranked women’s teams in the world and over the next two years all teams will play each other in a three-match ODI series either at home or away to create an ICC Women’s Championship league table.  The top four teams will qualify for the ICC Women’s World Cup in England in 2017.  Countries finishing in the bottom four will take part in the ICC Women’s World Cup Qualifier in early 2017 against teams from the ICC’s regional structures to determine the final four participants for the event.

You can find further information on the ICC Women’s Championship please visit here:

Live television coverage and radio commentary will be provided for all seven 2015 Women’s Ashes matches via Sky Sports and BBC Radio respectively.