England Women’s and LCB Thunder’s Kate Cross (pictured above with England Captain Charlotte Edwards) has signed for Brisbane Heat to compete in the inaugural Women’s Big Bash League in Australia.

Kate along with Lauren Winfield (England Women and Yorkshire Women captain), will be the Heat’s inaugural international recruits for the new T20 league in the Australian summer. 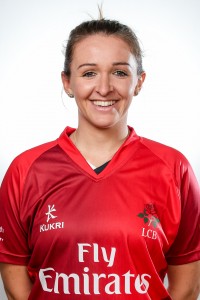 Both players had Queensland connections that lead to their recruiting by the WBBL Heat, according to coach Andy Richards: “Delissa Kimmince played alongside Lauren a few seasons ago and suggested she get in touch with us if she wanted to play in Australia. We actually had some conversations last season about her joining the Queensland Fire for the season but the English playing schedule didn’t quite allow it. When the WBBL was created, we were keen to pick up the threads of those plans and it is great things have worked out.”

Cross created international headlines a few months ago when she became the first woman to play in the Central Lancashire League men’s competition for Heywood, only to eclipse that announcement with a haul of 8-47 against Unsworth a few weeks after her debut.

Richards continues: “John Stock, our General Manager of Game Development, worked previously in the English Women’s High Performance unit and he recommended Kate to us. Kate and her brother Bobby both play for Heywood and are mates with Clinton Perren, the former Bulls batsman who plays for a rival club (Littleborough) in the Central Lancashire League, and ‘CP’ was good enough to give us a ringing endorsement.

“We’re very pleased to have both of the girls along for the season and are looking forward to the experience and skills they will bring to the group as we finalise our squad.”

Cross said she was excited about being part of the first ever WBBL: “It’s going to be a great cricket experience and also a great life experience.

“The English girls who played out in Australia last summer spoke highly of the quality of cricket and the enjoyment of living there, so I’m very keen to see what Brisbane and Queensland has to offer. Clint was very positive about Queensland Cricket and took the time to talk about the culture and the environment around their teams, so I’m delighted to be able to join the Heat and enjoy that.”

Cross will go from opponent to teammate when she shares bowling duties with the WBBL Heat’s first signing, Southern Stars quick Holly Ferling.

“There hasn’t been a lot of time to talk about it during the Ashes, as that has been the focus for all of us, but it will be great fun to play alongside Holly later in the year.’’ she said.

Jenny Laycock, LCB’s Women’s and Girls Cricket Development Officer, added: “Kate has worked hard over the past few years, she now has a professional central contract with the ECB and to also have the opportunity to go and play oversees in the Women’s Big Bash League for Brisbane Heat its testament to her commitment and skill. These opportunities will provide valuable experience for Kate and the other girls heading out there. I hope it will also inspire some of the younger generation of promising cricketers to look at what they could get to.”

Brisbane Heat WBBL fixtures are available below and full article available at their website by clicking here.