Great Britain Rugby Sevens have today announced the coaching structure for the men’s and women’s programmes ahead of the Rio 2016 Olympics Games. 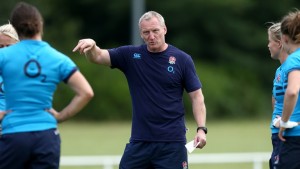 Middleton was appointed to a newly-created combined head coach role at the RFU earlier this year where he oversees both the England Women’s 15s and sevens programmes. A former Leeds Carnegie player and coach, Middleton joined the RFU in February 2014. The 48 year-old coached Leeds Carnegie from 2000-2011, working alongside Stuart Lancaster, Neil Back and John Callard.

During his tenure he helped Leeds reach the Premiership in 2001 and 2006 and secure Heineken Cup qualification in the 2002/3 season. As well as running the England Women’s Sevens programme, Middleton was the England backs coach at the triumphant 2014 Women’s Rugby World Cup.

Pugh was an instrumental member in the Wales side which claimed the World Cup Sevens title in Dubai in 2009. A robust flanker, Pugh was capped for his country marking his international debut with a try as a replacement in Wales’ Test match against USA in 2005.

More recently he has been involved in developing the women’s game at national level in Wales, with a heavy focus on raising the standards and profile of the sevens format of the game alongside head coach Rhys Edwards. He combines his coaching duties with Wales alongside those at Llandovery College.

Candidates nominated from all three unions were involved in a series of interviews in front of a selection panel including Stephen Gemmell (SRU), Josh Lewsey (WRU), Joe Lydon (RRU) and Mahdi Choudhury (British Olympic Association).

Simon Amor will take the position of head coach for the men’s setup with Gareth Williams joining him as assistant coach. Both are currently head coaches for England and Wales men’s sides respectively.

Amor, the former England sevens captain, has been in charge of his national team for the last two seasons which has seen them finish in the top four of the HSBC World Rugby Sevens Series rankings on both occasions. Last season’s final position of fourth ensured Great Britain was one of first four teams to qualify for Rio 2016.

Williams, who played over a decade on the international sevens circuit, took over as head coach of the Wales squad in 2014 having previously been assistant coach since 2008. He played for Carmarthen Quins and Llandovery and was also a member of the Scarlets side which won the Celtic League title in the first year of regional rugby in Wales.

Simon Amor said: “I am incredibly honoured and privileged to be appointed as head coach of the GB Sevens team. It will be a massive challenge but a huge opportunity. However with a lot of effort, common sense and working together across the unions we can get a team ready that can be very successful next year in Rio.”

“It is great to have Gareth alongside me. He has seven years’ experience behind him on the world series and he was assistant coach for Wales when they won the World Cup Sevens.  He has also made a real impact on the Wales team as head coach as well. It is important we have a blend of unions in the management to create the ‘GB’ feel and to maximise the strengths of the home nations.”

“I will, along with Gareth, meet the players and coaches from the other home nations. But the priority is to understand where we can get this Great Britain team preparing and playing in competition which is critical.”

Gareth Williams added: “To be selected as assistant coach for GB Sevens men is a massive honour and something I am really excited about. I’ve enjoyed working against Simon (Amor) on the World Series and now to get an opportunity to work alongside him is something I am looking forward to with relish. He is very competitive and I admire the way he sets his teams up. We have a huge challenge in front us but I’m prepared to tackle it head on as we prepare to take a competitive team to the Olympics.”

Simon Middleton said: “It was fantastic to be play a part in the qualification and then to get the job as well, I am thrilled. It is everyone’s ambition as a sports person to be involved in an Olympics Games so to be here now it is so exciting. To have rugby sevens in the Olympics is absolutely phenomenal for the women’s game. It will be such a showcase for us and particularly after a successful period winning the Women’s Rugby World Cup so this feels like the next stage in taking the sport further. Women’s sport is on the rise massively and all eyes will be on Rio next year. It is quite humbling to think we are in charge of trying to maximise this opportunity. Richie is a great guy with loads of international Sevens experience as a player and now coach. I am really excited about working with him within a unique GB environment.”

Richie Pugh added: “This is a really exciting opportunity and to have the chance of being involved in the Olympics which is a huge occasion is simply brilliant. I’m excited at the prospect of linking up with Simon and looking forward to learning from him as well. I have no doubt we can push for gold in Rio. As a player myself I was fortunate enough to play quite a lot on the World Series and was part of the Wales team which won the World Cup so hopefully I will be able to call upon that experience and pass some knowledge on to the girls in our quest for gold.”

Joe Lydon, GB Rugby Sevens Performance Manager said: “We are excited to have four excellent and talented coaches on board to take the programme forward. The selection panel carefully considered the nominated coaches from all of the unions involved in what was a thorough and open process. We now look forward to seeing the coaches influence the programmes as our plans begin to take shape and squads formed as we head into the season and then into the Games in Rio next summer.”

“The is no doubt we have some challenges ahead of us but these are exceeded by the unique opportunities as we look to assemble squads from across the three unions. Our focus turns to the identifying and selecting the best possible blend of GB qualified players. The coaches will be looking to players already in their national sevens setup as well as those the 15s game who have gained international sevens experience.”

The main preparation with the players as a wider squad will begin from June 2016 through a series of training camps, with a final squad of 12 players selected in July 2016 just prior to the start of the Olympic Games. Eligible players for selection should have played sevens 14 months prior to the Rio 2016 Olympic Games on either the HSBC World Rugby Sevens Series, Rugby Europe International Sevens tournaments or an invitational preparation tournament.