England made a winning start to the Women’s Ashes Series as Natalie Sciver and Lydia Greenway’s brilliant partnership helped set up a four-wicket victory. 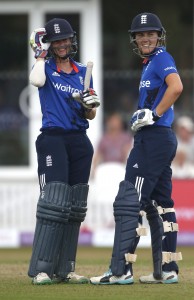 Sciver and Greenway put on 122 to help England recover from 80 for four as they chased Australia’s 238 for nine, which included four run-outs as Charlotte Edwards’ side fielded superbly.

Sciver and Greenway both departed before the close but Georgia Elwiss and Katherine Brunt safely steered England home and secured the two points available from the first of three Royal London one-day internationals.

England showed their intent immediately in the chase as Edwards pulled through midwicket for a four from the first delivery.

The opening pair of Edwards and Heather Knight – on her 50th ODI appearance – put on 20 in the first six overs before the skipper dragged on for 15 when facing Ellyse Perry.

Knight followed in the 12th over after a 21-run stand with Sarah Taylor, picking out Meg Lanning at mid-on off Sarah Coyte for 12. Taylor added 38 for the third wicket with Amy Jones but Erin Osborne struck twice in as many overs to seemingly give Australia control. 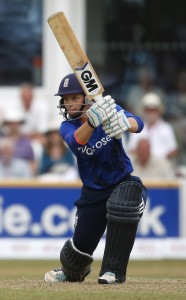 Jones was out for 15 – driving Osborne to midwicket where Jess Jonassen juggled the ball before taking it one-handed – and soon after Taylor edged behind for a run-a-ball 30.

But the Australian celebrations soon turned to frustration as Sciver and Greenway made progression. The pair put on fifty in 73 balls to keep England ahead of the required run-rate.

Sciver’s third ODI fifty came up from 58 deliveries and she continued to go on the attack, sending Holly Ferling back over her head for a one-bounce four.

The century partnership was reached in the 38th over, as Greenway moved towards a fifty of her own. She brought up her 12th ODI fifty by going over the top twice for successive fours off Kristen Beams in the 41st over.

The spinner got her revenge two balls later when a full toss was hooked to Blackwell at midwicket, who took a fine jumping catch to dismiss Greenway for 53.

Elwiss immediately looked in the mood as she joined the middle and, despite the loss of Sciver – caught at mid-off with victory 22 runs in sight – the win was secured with 26 balls to spare.

Australia’s innings was pegged back by four run-outs in the last 13 overs. Knight’s direct hit from mid-off accounted for Blackwell, with Edwards, Greenway and Brunt – the latter two with Taylor’s assistance – also getting in on the act.

Australia captain Meg Lanning chose to bat after winning the toss but Brunt gave England a fine start by removing both Australia openers, Elyse Villani caught at square-leg by Edwards before Jess Jonassen played on to her stumps.

Kate Cross took just four balls to take a scalp as the dangerous Lanning was lbw for just six. 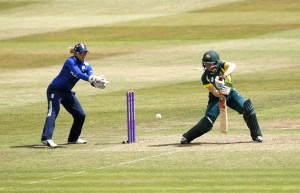 when on 21 – but eventually got into their groove.

Each recorded fifties – Perry’s was her sixth in a row in ODIs – and looked well set to cause damage in the closing stages.

But Blackwell’s risky single was punished by a direct-hit from Knight from mid-off.

Jess Cameron added 23 before being sent back by Perry after starting a run only to see Greenway’s throw find Taylor, who whipped off the bails.

Perry’s hopes of a first ODI hundred were ended on 78 when she picked out Sciver on the deep midwicket boundary off Knight’s bowling.

Brunt struck with the ball again, trapping Beams lbw, as she finished with 3-48, while Alyssa Healy ended unbeaten on 29, but Australia’s score was ultimately not enough.

Australia women won the toss and elected to bat

Live television coverage and radio commentary will be provided for all seven 2015 Women’s Ashes matches via Sky Sports and BBC Radio respectively.