Kirsten McAslan anchored Great Britain’s 4x400m relay team to gold during a good weekend for University of Bath-based athletes at the European U23 Championships in Tallinn, Estonia.

McAslan, a Santander Sports Scholar who has just graduated in Biochemistry, collected the baton in front after good work by Seren Bundy-Davies, Zoey Clark (Eddie McKenna) and Victoria Ohuruogu.

Despite being closed down by Poland’s Patrycja Wyciszkiewicz, bronze-medallist in the individual 400m, McAslan was able to hold on to the lead before kicking away down the home straight to secure victory.

“The girls gave me such a good lead so I knew I had to go out hard and just keep it,” said McAslan, who was fifth in the individual final. The Pole was third in the individual so I knew I’d have a battle on my hands and when I saw her on the screen with 200m to go I tried to kick again. I’m so happy we managed to do it!”

Leon Reid, coached by James Hillier at the Sports Training Village, had mixed feelings about his silver medal in the 200m.

He trailed Karol Zalewski slightly going into the straight and wasn’t quite able to pass the Polish sprinter, finishing runner-up in 20.63 – just one-hundredth of a second shy of his personal best.

“It’s good and bad,” said Reid. “I know I could have got gold but I tightened up at the end. I’m still happy. I’ve got my coach a medal, which is what he wanted, so it’s good. The goal is to get medals for the country, it’s just a shame it’s the wrong colour.”

Training partner David King, a Sports Performance student, suffered disappointment in the 110m hurdles final as he finished fourth in 13.90 – just four-hundredths shy of a bronze. 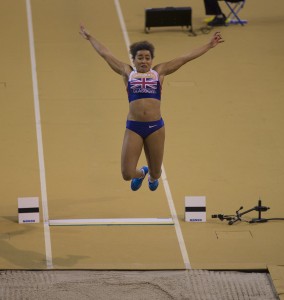 Jazmin Sawyers, who does some of her training at the University of Bath, captained the British team in Tallinn and produced a worthy performance, producing a personal best of 6.71m to win long jump silver.

“I’m so chuffed!” said the Commonwealth Games silver-medallist. “I feel like that’s the kind of jump I’ve been waiting to show I can do for ages and it’s been so frustrating that it hasn’t come out. When it came up on the board I could barely believe it – I’m so, so happy! It’s my first PB in almost three years – I’ve got no more words.”

The 14-year-old Team Bath runner, coached by Colin Baross at the Sports Training Village, won his under-15s 200m heat in a personal best of 22.28 before taking gold in 22.40.

Photo above shows Kirsten McAslan in April when she won Team Bath athlete of the month.