The Roses concluded their World Cup warm-up fixtures in dramatic fashion on Monday evening as the match against a Netball Superleague Select side at Surrey Sports Park was abandoned with four minutes remaining.

England reserve Ama Agbeze was appearing for the NSL team when she collided with a team mate in the defensive circle. With a suspected neck injury the umpires called a premature end to the game so that Agbeze could receive medical care.

After being tended to by physios on court, the defender was placed in a neck brace and taken to a local hospital for checks. She has since received the all clear.

As the game had entered the final stages, the umpires declared the standing 69-34 score as the match result to seal England’s fourth victory in eight days at the home of Superleague champions Surrey Storm. 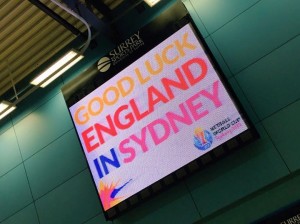 Surrey Storm and England Goal Attack Pamela Cookey said, “It was great to be back at Surrey Sports Park in front of a fantastic crowd. Everyone has been working really hard in camp over the past few weeks, and tonight has been a great send-off as we prepare to fly out to Sydney for the World Cup. We’ll be going out there to make the country proud and will be giving everything to bring the trophy back with us.”

It had been another blood and thunder affair with the NSL Select team providing fierce opposition.

However, it was England who made the best start. Good defensive work produced turnover ball and Jo Harten was combining brilliantly with Rachel Dunn in attack. The ANZ star produced a stunning look-away feed into the Storm shooter to push the Roses 5-1 ahead.

The gap was retained until the closing stages of the opening quarter when the NSL team hit back. Spurred on by some energetic work Sophia Candappa, the vibrant attacking unit started to find their flow and Kadeen Corbin was on hand to pull the deficit back to 15-13.

Having had a solid run-out, Geva Mentor was replaced by Sonia Mkoloma for Q2 with Pamela Cookey taking over at GA.

Another wonderful start to the quarter saw the Roses ease into a 12 goal lead as they over powered their opponents with exceptional defensive work and intricate through court play.

The momentum was stopped for both sides when Nat Haythornthwaite was forced from the court following a hefty tumble. Sasha Corbin was her replacement and within seconds she too was down as the intensity in the contest for the ball remained high.

The half-time whistle allowed everyone to patch themselves up and take a well-deserved breather with England in a commanding 34-18 lead.

More changes followed for England at the interval with Tamsin Greenway and Stacey Francis entering the action for the first time. There was also a reshuffle in the mid-court as Serena Guthrie switched to WD, moving Jade Clarke to C.

Amongst the battles, were occasional glimpses of world class attacking play. The re-introduced Dunn drew gasps from her home crowd as she leapt off court after losing her balance, only to release her shot in mid-air and score from behind the post.

It continued to be a dominant display from the Roses as they dictated the play in the mid-court. The Storm attacking unit of Greenway, Dunn and Cookey were impressive at their home venue.

The only down side for England was slight knocks to Guthrie and Francis which saw them replaced as the third quarter drew to a close. With fifteen minutes to go, the Roses had stretched their advantage to 55-28.

A final switch was made for Q4 as Francis shook off her earlier blow to enter the action at WD and Bayman took over at C with Clarke heading off.

Cookey continued to have a fantastic time in the attacking circle and it was only with ten minutes to go that she suffered her first failure of the night after 24 successful attempts. Unfazed, the vice-captain grabbed the rebound off her own miss and made amends immediately.

The match started to slow as the pace of the previous three quarters took its toll and England were on their way to seeing out another hard-worked success.

As the game headed to its conclusion, the collision taken by Agbeze forced the full-time whistle to come early. An appreciative sell-out crowd rose to their feet to show their support for Agbeze and to give the England players one last send-off before their World Cup adventure.

The England Roses will next be in action on Friday 7th August when they open up their World Cup campaign against Scotland. You can watch that match and every England fixture in Sydney exclusively live on Sky Sports this summer.