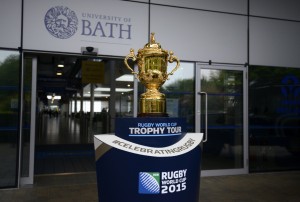 The Web Ellis cup tour comes to The University of Bath

Bath Rugby head coach Mike Ford was in the audience to see the energetic performance from youngsters at Oldfield Park Primary School and the BANES Youth Dance Company.

All the children then had chance to have their photograph taken with the Webb Ellis Cup, as did members of the public and University of Bath staff.

The Sports Training Village was the first stop on Day 33 of the nationwide Trophy Tour, building up to the start of the Rugby World Cup on September 18.

“Having the World Cup trophy come to Bath makes the arrival of the World Cup in England real,” said Ford, who was assistant coach when England reached the final in 2007.  The only time you ever usually see the trophy is on TV with some superstar lifting it above his head so for the kids to get so close to such an iconic trophy is inspirational. The World Cup is going to be huge. It’s going to be a fantastic tournament and I expect England to do really well.”

England trained at the University of Bath ahead of the 2007 competition and this year Australia will be honing their preparations at the Sports Training Village.

“The facilities here are second to none – we got to a World Cup final on the back of training here,” Ford added.  “Australia are a world-class side and they pick their venues really, really well. They’ll enjoy their time here.”

The Wallabies’ forthcoming visit to Bath was reflected by some Australian themes in the dance routine, choreographed by Fleur Hoefkens and Dan Martin of the BANES Youth Dance Company.

“The dance was incredible,” said Martin. “Our first rehearsal was just a month ago and that was as single group. Today was the first time we’ve done it all together and it was very inspirational to watch.”

Hoefkens added: “The dancers all went off and were taught by their separate teachers, so to come together to perform like that worked really well. They all performed fantastically.”

The dance routine was unique on the Trophy Tour and was filmed for possible inclusion in the opening ceremony of the Rugby World Cup.

Stephen Baddeley, Director of Sport at the University of Bath, said: “There was a lovely energy and vitality about the children, and they really brought the dance alive. It was a privilege to have the trophy here and to start to set the scene for September.  We’ve had Wimbledon yesterday, the Ashes, the Women’s World Cup and now we’re looking forward to the rugby, so this summer has really generated enthusiasm in sport.”

Members of the public also took the opportunity to grab a picture with the trophy, which was on the display outside the Sports Training Village.

“It’s great to see the trophy up close and personal,” said Aidan Smith. “Having the trophy here and then the World Cup should hopefully have the same effect as the Olympics had where everyone can get behind the team and they can put in a few good performances.”

Ian Smith added: “You wouldn’t see the football World Cup coming around like this. There’s a different culture, a different ethos, in rugby.”

As well as the Trophy Tour and the Australian Team Base, there are three players with University of Bath links who could feature at the Rugby World Cup.

Louis Mulholland, a first-year Economics student, has been named in the USA’s 50-man training squad and Bath Rugby players Rob Webber and Dom Day, who both coach at the University of Bath, are in the England and Wales training squads respectively.