While the England women’s football team were battling to victory against hosts Canada in Vancouver in the football World Cup, the rugby team began their Rugby Super Series campaign in the stifling heat at Calgary Rugby Park with a convincing 39-10 win over the USA. 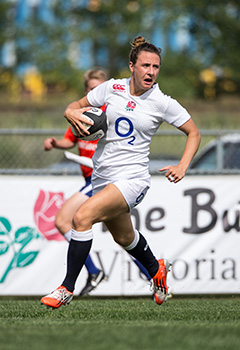 Richmond’s Sarah McKenna scored a brace of tries in the seven-try victory which also saw debutant Rachael Lund touch down. England will now take on New Zealand on Wednesday at 11pm BST in the second of this three-game series.

The USA started well, exerting pressure in England’s 22 and they came away with a fifth minute penalty from the boot of Kimber Rozier.

This new look England side, however, then turned the screw on the USA with their first try after nine minutes. Fly-half Emily Scott, who was making her eighth appearance for England, was at the heart of the move and finished off some nice work by the backs to score.

Just before the first water break in the searing hot Canadian conditions Rugby World Cup winner Kay Wilson then cruised in for a try after a good England line-out and drive. Scott distributed the ball well to get it out to Wilson on the right wing.

Lock Rowena Burnfield then made it 15-3 when she spotted a space in the midfield to charge through and score a converted try before McKenna ran in for the first of her two scores. Some good work by the forwards kept the ball alive and Scott, running the game well, broke loose before switching the ball out to McKenna who raced in.

USA fullback Jessica Wooden clawed a converted try back for the USA just before the break to reduce the deficit to 10-22.

Saracens’ McKenna started where she left off after the restart with her second try, this time with the help of flanker Hannah Gallagher who made the initial break down the left wing before offloading to the winger.

On 52 minutes, the experienced Marlie Packer then nicely finished off a driving maul from a line-out before Lund, who had been on the pitch for just three minutes, benefited from another well worked England line-out. The ball was worked through the midfield and eventually out to the left wing where Lund, on the first touch of the ball, ran in with ease to score and close out the game. 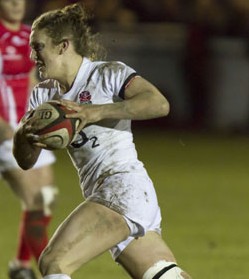 England Head Coach Simon Middleton, in his first XVs game in charge, said: “This was a solid start with a performance that had lots of positives as well as lots still to come. We have worked hard on our decision making and focussed on playing with heads up and attacking the space. I thought we did this extremely well, particularly in the first half.”

“We did look a bit rusty and at times our execution just fell a touch short of what we were looking for, but given the lack of time we have had together this is to be expected. Having said that we pulled some really good passages of play together particularly in the first half and scored some excellent team tries.”

“It was also great to get our two new caps Lark Davies and Rachael Lund on the field and what a dream start with Rachel scoring with her first touch of the ball after a line-out thrown by Lark.

“Recovery will be the key now as we will undoubtedly face a sterner test against a New Zealand side that dispatched Canada convincingly on Saturday without really looking at their best. We’ll be looking to field some of our more experienced players on Wednesday to add fresh legs and build on a good start.”

In the other Super Series tie New Zealand beat Canada 40-22.  England will play New Zealand next and  Canada will face the USA.

All matches can be watched live here