England Women’s Head Coach Simon Middleton has called up England Under 20s player Rachel Lund to compete in the Rugby Super Series in Canada which kicks off this weekend. 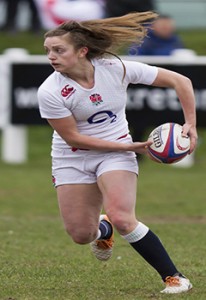 Middleton, whose side will play the USA, New Zealand and Canada between June 27 and July 5, has called up Lund in place of Bristol’s Abbie Brown who has been ruled out through injury.

Lund, who played against France this season for England U20s and can play in the centre or at fullback, will join Megan Jones and Lark Davies who are all set to make their England debuts.

Middleton said: “It is very disappointing to have to withdraw Abbie at this stage. She had a great weekend playing Sevens and also showed a lot of potential during the Six Nations this season so this is a real shame for her. However, we are fortunate to have Rachel to call upon.”

“Rachel was one of a handful of England Under 20s players who joined the England camp recently as we continue our ongoing development of players with one eye on the 2017 Rugby World Cup. Rachel was outstanding and did not look out of place at all so it is great to call her up for this exciting tour.”

Rugby World Cup winner Sarah Hunter will captain the squad as she returns to play in her first tournament since helping England to win the WRWC in August. Hunter has been side-lined with a knee injury since the start of the year. Katy Mclean, who captained England during the Six Nations, is ruled out through injury.

Emily Scarratt, who scored a 16 point haul in the victorious 21-9 Rugby World Cup final against Canada, also returns to XVs rugby for the first time this season having been involved in England’s sevens Olympic qualification campaign. The centre/fullback has been named as vice-captain. Marlie Packer and Heather Fisher are also back for their first starts in ten months having been involved with England Sevens.

England will play the USA on June 27 in Calgary before taking on fierce rivals New Zealand on July 1 in Red Deer. England then take on Rugby World Cup runners-up Canada in the tournament finale on July 5 in Edmonton. The matches can be watched live here .