Goals from Alex Danson and Kate Richardson-Walsh kept up Great Britain’s outstanding winning run in the competition and booked their place in the semi-final of the competition. Both goals came in the opening quarter of the match and despite a spirited display from South Africa, Danny Kerry’s team produced a professional performance to give themselves a great chance of securing Olympic qualification this weekend.

Great Britain signalled their attacking intent in the opening exchanges. Hollie Webb fed Alex Danson whose backhand shot was well saved by Sanani Mangisa. The goalkeeper then recovered to block the follow-up from Hannah Macleod.

Great Britain dominated the possession as South Africa adopted a defensive strategy to contain their threat and hit them on the break. Chances were hard to come by but with three minutes to the end of the quarter the game was turned on its head. First, Danson spun away from her marker and supplied a cool finish to break the deadlock with her third goal of the competition. Minutes later it was 2-0 as Kate Richardson-Walsh’s penalty corner found the net via a deflection off a South African player and the crossbar giving GB a 2-0 lead and a dream start. 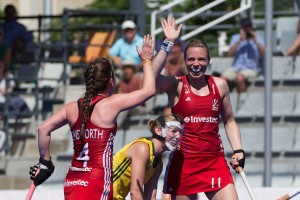 Kate Richardson Walsh scores the second goal on a PC

South Africa posed their first real threat in the second quarter after good work from Bernadette Coston won them a penalty corner. Liné Malan hit a fierce shot but it flashed wide of the target. Lily Owsley was shown a green card, reducing GB to ten players. South Africa saw their chance with the player advantage and forced a couple of penalty corners. However some excellent defending from Giselle Ansley snuffed out the danger and preserved the lead at half time.

Danson continued to cause the South African defence problems in the third quarter. South Africa searched for a way back into the contest and Maddie Hinch was called upon to save a slapped effort from Jade Mayne. The Holcombe stopper had to be on her guard again with five minutes left in the quarter. A long cross found its way to Coston at the back post but Hinch smothered well to preserve the two-goal cushion.

Great Britain almost made it 3-0 late on in the third period as Susannah Townsend seized on a loose ball in the circle and let fly, only for Lisa Deetlefs’ timely intervention to send the ball looping over the bar.

In the fourth quarter it was still cagey with both sides knowing the next goal would be crucial. As players began to tire the game started to open up. South Africa threatened through Dirkie Chamberlain but the Canterbury forward’s strike was smashed wide of the target. Then, a lung-bursting run from Owsley set Danson free in the circle but with the angle narrowing she couldn’t quite set up a sliding Owsley with the return cross. Great Britain were able to see out the remainder of the game and set up a semi-final clash with either Germany or Spain this Saturday. 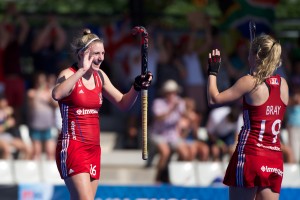 The next chance to see Great Britain’s players after this tournament will be this summer as they compete for their respective home nations at the Unibet EuroHockey Championships 2015. All the information can be found at www.eurohockey2015.co.uk.

Great Britain Forward Alex Danson: “We’re absolutely delighted. It was a really professional performance from the team. I’ve said it before but we do our homework on every team. The secret is that there are 31 of us in this squad and we train so hard every single day. 31 of us won that match today and we’re delighted. It’s all about the team and the supply we get. We look at the video and assess the opportunities we get but we’re always looking to do better.”

“We’ll do our recovery and get ready for the next game. The work we do back home puts us in a really good position. Fitness is a key area for us and we have a lot left in the legs to hopefully get the job done.
We don’t mind who we play next. We do our homework on every team. We play to our strengths and our tactics and that’s what gets results.”

Great Britain Head Coach Danny Kerry: “An awesome opening quarter took us into an early lead. South Africa had to come and press but we played smart and continued to control the game. I am so proud of the athletes and staff and what they have done over the last year. I’m delighted for Alex [Danson] and Kate [Richardson-Walsh] taking great goals.”