Two goals from East Grinstead’s Sophie Bray helped steer Great Britain to their third win in three games at the World League Semi-Final. Bray added her brace to goals from Alex Danson and Georgie Twigg to fire Danny Kerry’s side to a 4-2 win over Canada. 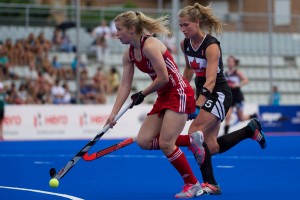 Great Britain had the better of the opening quarter with the lion’s share of possession, however Canada’s deep defence was proving difficult to break down and chances were hard come by. A number of darting runs by Danson and Bray were snuffed out by the massed ranks of defence but with eight minutes on the clock Danny Kerry’s side broke the deadlock via their first penalty corner.

With a move straight off the training ground Kate Richardson-Walsh played the ball in for a diving Alex Danson to deflect the ball high into the net for her 35th GB goal, moving her into second on the all-time top scorers’ list. Canada threatened late on in the quarter when Kaelen Watson broke free down the right but her shot was comfortably saved by Maddie Hinch.
In the second quarter Great Britain continued their dominance. Kaitlyn Williams made a good save to keep out a Giselle Ansley penalty corner as the pressure mounted. Against the run of play, Canada leveled the scores. Abigail Raye did well to break down the right into the circle, her cross found Stephanie Norlander who slotted in Canada’s first goal of the competition. 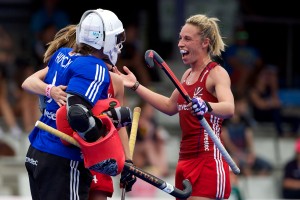 With 24 minutes gone, Great Britain re-established the lead. Laura Unsworth, making her 50th appearance for Great Britain slapped a penalty corner at goal and although Williams made the save, Georgie Twigg reacted first to pivot and fire in the rebound to make it 2-1.
Danson continued to terrorize the Canada defence and Williams did superbly to deny the No15 with a good block and then made a fine save to her left to repel a fierce Danson backhand strike.
With 35 minutes gone the third GB goal arrived from another penalty corner. Kate Richardson-Walsh fizzed the ball in and although it hit a defender’s foot, the umpire played a good advantage, allowing Bray to pounce and lift the ball over the goalkeeper for her second of the tournament.

In the final quarter Danny Kerry’s side searched for more goals. Kate Richardson-Walsh beat Williams with a penalty corner but found Raye on the line in superb form, the No15 effecting an excellent goal line clearance. With six minutes to play they got the fourth. A lovely run and cross from Susie Gilbert set up Bray at the far post and she slammed the ball home on the bounce for her second and Great Britain’s fourth.
Canada grabbed another goal on the stroke of full time thanks to Brienne Stairs but it was too little too late and Great Britain were not to be denied.

Great Britain Forward Alex Danson: “We’ve set our stall out in this tournament to take it one game at a time we’ve done the job and got the points. We’ve got one more game to look forward to in the pool. We had some fantastic opportunities today. The secret of this team is how hard we work away from the games, back in training. We’re disappointed with some of the chances that didn’t go in but we’ll go away and review and we’ll come back ready for China.”

Head Coach Danny Kerry: “Some of our play was very good. If we had kept greater composure in the attacking circle we could have scored a higher number of goals. I felt we controlled the game which given the nature of tournament hockey, was a very good thing to see.”