Great Britain picked up their second consecutive win of the World League Semi-Final with a gritty display to overcome a physical Argentina side with a 2-0 win. Despite a missed penalty stroke by Alex Danson in the first half,  goals from Hanna Macleod and Sophie Bray were the difference on the day and steered Danny Kerry’s side to the top of the pool. 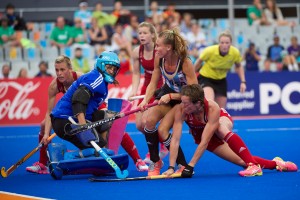 The first quarter was an even affair with Argentina probably shading the territorial battle without causing too much threat to the Great Britain goal. Carla Rebecchi went closest with a penalty corner that flew just wide. Great Britain forced a penalty corner of their own which was blocked on the line by a defender’s body, resulting in a penalty stroke awarded on video referral. Alex Danson stepped up but her effort crashed against the woodwork and away to safety.

The second quarter followed a similar pattern as both sides wrestled for control of the game. Belen Succi was called upon to repel a penalty corner from Kate Richardson-Walsh whilst at the other end Maddie Hinch excelled herself with a superb low save to deny Rebecchi from another penalty corner.

With 37 minutes on the clock the deadlock was broken. Susannah Townsend drove into the circle and hit a reverse stick shot which Succi saved but the goalkeeper could only watch as Macleod pounced to lift the rebound into the roof of the net. Rebecchi resumed her personal battle with Hinch but the Holcombe stopper saved well to her right and then denied the Argentina striker again. Delfina Merino found herself in space in the circle with time running out but blazed her effort over the bar. 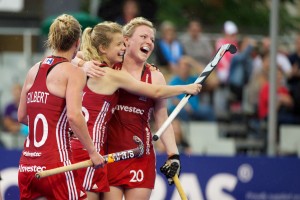 The teams went into the final quarter with the game finely poised. Shona McCallin did well on the post at a penalty corner to keep out another Rebecchi effort and then Hinch pulled off another fine save blocking from Rocio Sanchez to preserve her clean sheet. With two minutes to play the win was sealed. Kate Richardson-Walsh’s penalty corner was charged down  but Lily Owsley reacted well, firing the ball goalwards as she fell. Sophie Bray got a vital touch to loop the ball over the line to seal the win for Danny Kerry’s side.

Great Britain Goalkeeper Maddie Hinch:
We’re absolutely delighted. It was a massive team effort from us today. We’ve been in good form coming into the tournament. We had so much belief that today was our day to finally beat them. They’re a fantastic side but we stuck at it and held on.”

“They have the best forwards around so we knew we had to negate that today. We need to show belief in the second half and that’s what we did. We’re absolutely delighted.”

Head Coach Danny Kerry: “It was a nervy start but we created good opportunities throughout the first half including the stroke. Some physical tackling from Argentina attempted to stop us from playing but we grew into the game. Our organised defence was great as Argentina threw numbers forward and we looked menacing on the counter-attack. I’m proud of how this group has gone about two exceptionally tough pool games.”