England Women will face Ireland in the quarter-finals of the Rugby Europe Sevens Grand Prix in Kazan, Russia, tomorrow (Sunday).

Simon Middleton’s side head into day two of the first leg of the series with an unbeaten record after wins over Germany, Wales and the Netherlands today.

England, who named a new-look side for the first leg of the series which included XVs Rugby World Cup winner Vicky Fleetwood making her sevens debut, opened day one with a convincing 40-7 win over Germany. Skipper Abigail Chamberlain, Emily Scott, Fleetwood, Fran Matthews, Claire Allan and Heather Fisher all scored with 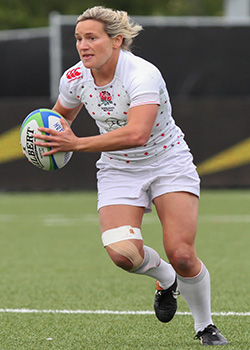 In the final game of the day, England were again in fine form running in 26-5 winners against the Netherlands. This time Alex Mathews ran in a hat-trick of tries with Claire Allan also touching down. McKenna added three conversions to seal the win.

Middleton said: “We dispatched of the opposition well today, playing the way we wanted to play so we are pleased with that. We were clinical and strong in our physicality too. Now we play Ireland and that is going to be a big game. They are a much improved side and given they are still after Olympic qualification, the stakes are high for them.”