Two goals in a minute steered Great Britain to a win in their opening World League Semi-Final match against hosts Spain. A penalty stroke from Alex Danson and a first goal in international hockey for Clifton’s Joie Leigh were enough despite a strong display from the hosts. 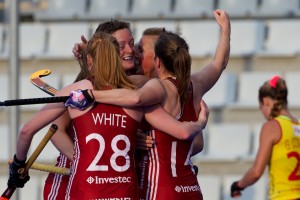 Click here for the official match information.
Great Britain made a bright start and forced Spanish goalkeeper Maria Lopez into an early bout of action as she smothered from close range. Danny Kerry’s side won the first penalty corner of the match but Laura Unsworth’s slap was repelled by Lopez. From another early penalty corner, Captain Kate Richardson-Walsh stepped up but her shot flew wide just wide. Hannah Macleod played in Joie Leigh for the best chance of the first quarter but her shot from an angle was saved by the goalkeeper.

Spain had the better of the second quarter but it was Helen Richardson-Walsh who almost opened the scoring, Lily Owsley’s pass fell agonizingly out of her reach at the far post. Spain forced a series of penalty corners, but Lola Riera’s radar was slightly off and she couldn’t find the opener.

Great Britain started the second half well just as they did the first. They forced an early penalty corner but Giselle Ansley’s effort fizzed wide. Danny Kerry’s side kept pressing and a diving Susannah Townsend couldn’t quite apply the finish to a Danson cross. They went even closer when another penalty corner from Kate Richardson-Walsh thumped the post and rolled away to safety.

Spain hit back and forced two penalty corners at the other end, but Macleod’s brave defending saw the danger off and it was still goalless going into the final quarter.

The turning point came with four minutes gone in the final quarter gone as GB were awarded a penalty stroke for a foul on Alex Danson. Spain asked for a video referral but to no avail. The No15 took the chance herself and beat Lopez to make it 1-0. It was 2-0 moments later as Danson crossed from the left for Joie Leigh to guide home her first international goal with a deft finish.

Spain worked a slick routine off a late penalty corner but Maddie Hinch was equal to the task and made the save. GB finished the game with ten players after Susannah Townsend was sin-binned but Danny Kerry’s team saw the game out to take the three points.

Great Britain’s next game is against Argentina on Saturday June 13 at 16:00.

Great Britain Captain Kate Richardson-Walsh: “We’re happy with the result and it’s good to score a couple of goals. There was a point in the first half when I thought it wasn’t going to come, but we stayed patient and stayed with it. I think Spain are playing fantastically well, they’re the home side who play with a lot of energy, they’re as fit as they’ve ever been so to get the win is great.  Alex Danson is a fantastic striker who is great under pressure so there was no doubt she’d put the penalty away. We have some terrific young talent coming through, players like Joie Leigh and Lily Owsley, I’m really pleased to see her get on the score sheet.”

Head Coach Danny Kerry: “It was a terrific opening quarter where we opened Spain up but the ball wouldn’t go in. Our defence was solid against a quality Spain side & we continued to create chances. Alex Danson showed world class composure after a long wait for the stroke and then brilliant skill to centre the ball for Joie Leigh’s first international goal. On a personal note I am delighted for Emily Maguire who made her 150th international cap – that is some achievement.”