There is a strong University of Bath representation in the 47-strong British Athletics squad announced for this month’s European Team Championships in Cheboksary, Russia.

Eilidh Child, coached by Malcolm Arnold at the Sports Training Village, will compete in both the 400m hurdles – the event in which she is European champion – and the 4x400m relay.

She is joined in the relay squad by Laura Maddox, the European indoor silver-medalist who trains with University of Bath head coach Colin Bovell. 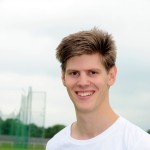 Lawrence Clarke, also part of Arnold’s training group, has been selected for the 110m hurdles and University of Bath graduate Danny Talbot will go in the 200m.

He has also been named in the 4x100m relay squad along with Andy Robertson – both are coached by Dan Cossins at the STV.

Jazmin Sawyers, who does some of her training at the University of Bath, will be looking to continue her impressive form in the long jump.

And Jack Green – who competed at the London 2012 Olympic Games while based at the university – continues his comeback to the sport by being selected for the 400m hurdles and 4x400m relay.

The European Team Championships will take place on the weekend of June 20-21.