The sun-soaked stadium in the Netherlands saw Canada beat Australia to claim the Amsterdam Sevens trophy, after yet another epic battle between the two sides, and England will represent Team Great Britain at the Olympic Games in Rio 2016, after beating the USA in a thrilling “winner takes all” match on the last day of the Amsterdam Sevens. 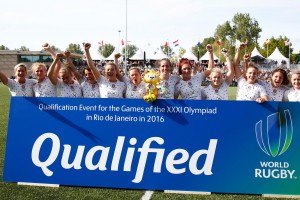 New Zealand ensured they would be crowned series champions on day one, and so picked up their trophy for the third year in a row in front of a fantastic Dutch crowd. The Kiwis, led by Sarah Goss, also picked up the Plate on day two while Fiji won the Bowl final.

Speaking after her team ensured Olympic qualification, an emotional England captain Abi Chamberlain admitted it was a massive day for all the team.

“It’s the dream isn’t it? It’s probably been one of the best, and hardest, years of my life. We’ve worked our backsides off to be in this position and we did it. All credit to USA because they were fighting right down to the end.”

It was also a momentous occasion for Canada who won their first ever tournament on the Women’s Sevens Series.

New Zealand had already booked their place in the Olympics, when they qualified at the London 7s last weekend. Canada and Australia qualified on day one in Amsterdam. The remaining teams can qualify for Rio 2016 during a series of regional qualifiers in the coming months and a repechage that will take place next year.

World Rugby Chairman Bernard Lapasset said: “This has been yet another fantastic end to a thrilling Women’s Sevens Series and the last two matches of the day in Amsterdam demonstrated why it’s one of the fastest-growing team sports in the world.

My congratulations go to New Zealand, Canada, Australia and England for qualifying and also to New Zealand for winning the series title for the third year in a row.

The intensity, speed and skill involved in the women’s game is thrilling to watch, and I have no doubt it will increase even further as we move towards Rio 2016.”

You can see all today’s results here.