Great Britain Women’s Head Coach Danny Kerry has named a squad of 18 athletes ahead of the World League Semi Final in Valencia from 10-21 June 2015. Great Britain will play hosts Spain in their opening pool game before facing Argentina, Canada and China to complete the group phase of the competition, with a place in the World League Final as well as Olympic Qualification up for grabs.

The Great Britain squad contains 14 athletes who competed at the Champions Trophy in December 2014; there are four changes to the group who finished fifth in the competition in Mendoza. The players to come in are Scotland and Reading defender Emily Maguire (above photo), who is in line for her 150th combined Great Britain and Scotland cap the next time she plays, Helen Richardson-Walsh, Kate Richardson-Walsh and Nicola White. 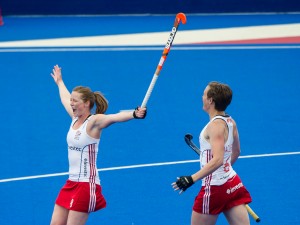 Helen Richardson-Walsh who reached 250 combined international caps in the recent Investec Private Banking series against Japan will compete in her first international tournament since EuroHockey 2013 after overcoming long term injury. Kate Richardson-Walsh comes back into the squad after returning to full time training in January after some time away from the game. Holcombe’s Nicola White is recalled after her non selection for Mendoza. 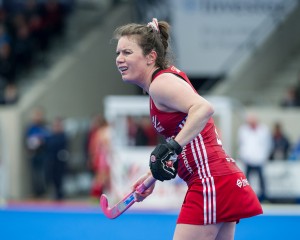 The players not selected who competed at the Champions Trophy are Sarah Haycroft, Sam Quek, Zoe Shipperley and Ellie Watton.

Great Britain Head Coach Danny Kerry: “It’s been great to see such strong focus at training since last September. There has been a great deal of competition for places, and the commitment and spirit across the squad is excellent. Selection should always be challenging and it is a testament to the depth of quality within the group that the staff have had many long meetings over the months to come to our final tournament squad. We have had multiple options for multiple positions and this has created a great deal of debate for the coaching staff. It is good news for the competitive nature of the squad and will stand us in good stead for the upcoming challenges, not least that of securing a place in the Olympic Games in Rio.”

The top three sides in each of the World League Semi-Finals will secure their places at the 2016 Olympic Games in Rio, accounting for six of the twelve qualification spots. The hosts, Brazil have a spot available should they meet the qualification criteria. There are also places for the winners of the Pan American Games, The Asian Games, The African Qualifying Tournament, The Oceania Cup, and perhaps crucially for Great Britain, the Unibet EuroHockey Championships 2015.