The England and Wales Cricket Board (ECB) today announced that Joe Root and Charlotte Edwards have been named, respectively, as the England Men’s and England Women’s Cricketer of the Year for 2014-2015.

All four players were honoured at a special dinner held in the Long Room at Lord’s this evening, which was hosted by ECB, and England cricket team sponsor, Waitrose.

The awards recognise the outstanding performances of the players in all formats of international cricket since May 2014. 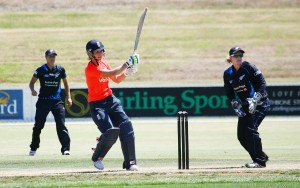 England women’s captain, Charlotte Edwards, enjoyed another remarkable year to win the women’s team award for the second consecutive year.  Averaging over 75 in ODIs and nearly 60 in Twenty20 International (T20I) cricket over the last 12 months, Edwards once again led from the front, as England women secured ODI series victories against India and New Zealand, alongside T20I series wins against South Africa and New Zealand.

Heather Knight, Anya Shrubsole and Sarah Taylor were the other nominees for the award.

During the evening Charlotte Edwards was also presented with a silver England cap by ECB’s Director of Women’s Cricket, Clare Connor, to celebrate her 200th match as England women’s captain.  The feat was achieved during England’s third T20I against New Zealand in February 2015.

Members of the cricket media voted that Joe Root’s exceptional contributions with the bat for England during this period should make him the winner of the men’s award.  In Test match cricket Root scored 1135 runs at an average of nearly 95 since the two-match series against Sri Lanka at the start of last summer, including four scores of 149 and above, with a top score of 200 not out against Sri Lanka at Lord’s.  The Yorkshire batsman also hit three One-Day International (ODI) centuries in the same time frame.  Root overcame strong competition from a short-list which included James Anderson, Moeen Ali and Gary Ballance to win the award for the first time.

Saqib Mahmood was named EDP Cricketer of the Year after a season which saw him make his England U19 debut and show great consistency in all forms of the game. Mahmood recently signed his first professional contract and beat off competition from his Lancashire team-mate Haseeb Hameed, Hampshire’s Brad Taylor and Warwickshire’s Aaron Thomasson to win the award.

Batsman Luke Sugg was the stand-out England Disability Cricketer of the Year for 2014-2015, after scoring over 500 runs, including four centuries, at the 2014 Blind Cricket World Cup in South Africa before Christmas.  His efforts helped England to reach the semi-final stage of the competition.

ECB Chief Executive, Tom Harrison, said: “These awards once again highlight the sheer breadth of individual talent across our different England teams and there was fierce competition for the trophies in all four categories. Our thanks go to the England teams’ sponsor Waitrose for their continued support, to the cricket media for  their assistance with the judging process, and to MCC for once again staging the event this evening in the iconic Long Room at Lord’s.”