Reading returned to winning ways with a 2-1 win against a so far unbeaten Everton side at Farnborough on Saturday.

In what could prove a big week for Reading and their promotion aspirations, they stepped up to the task by beating a very good Everton side. 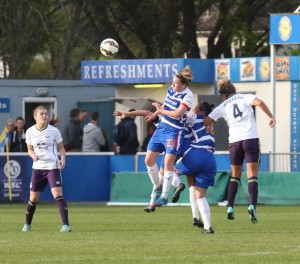 After a shining start to the season, the Royals had recorded 1 point from their last two home matches with Yeovil & Oxford.

Kelly Chambers rang the changes, with Fran Kirby missing, Helen Ward led the front line and Kirsty McGee returned to the back four along with Harriet Scott.

In a very even match, the Royals made the breakthrough on 37 minutes when Helen Ward intercepted a wayward back pass and cleverly laid the ball back to Lauren Bruton who shot past the stranded Walsh in the Everton goal from 20 yards.

Just rewards for Ward who worked tirelessly whilst leading the Reading line in the absence of Fran Kirby.

The home side went into the break with the 1-0 lead and when the second half resumed, they pressed for more.

The second goal eventually came when Bruton played in Emma Follis on 50 minutes and Follis stuck a delightful shot into the far corner past the despairing dive of Megan Walsh. 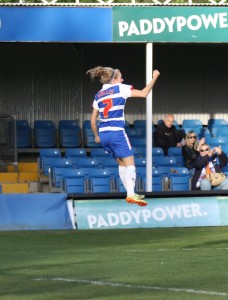 The two goal advantage did not last long though, as Becky Jane brought down Dan Turner in the box and the penalty was despatched by Paige Williams, sending keeper Grace Moloney the wrong way.

Moloney did have the last major influence on the game though, as Everton pushed for an equaliser, she made a fantastic save to deny Simone Magill and secure the three points.

This sets up next week’s top of the table clash with the Belles hosting the Royals.