Dady started the bout with the intent to impose her strength – very much the taller boxer and physically more developed she spent most of the first round in clinches and leaning on not allowing Retzen to box.

Dady continued to spoil effectively in the second round making the bout a scrappy affair but neutralising the threat from the shorter boxer.  After a talking to from the corner Dady chose to keep it at range, giving Retsen the opportunity to demonstrate her boxing ability and land the cleaner shots.

The final round once again returned to ‘exchange and hold’ style but the overall tactics edged the split decision for Dady.

Despite the Championship bout at 51kg not being the eagerly anticipated contest between Olympic and Commonwealth gold medallist Nicola Adams and World Silver medallist Lisa Whiteside – it was still an exciting match up.  Shannon impressed on her way to the finals with an aggressive style and strong shots.  Whiteside, still with a point to prove, was equally up for the challenge.

The bout had an explosive start with both boxers throwing a multitude of shots but from the outset Whiteside got out of range more proficiently and ended the exchange.  Throughout the bout Whiteside made the most of Shannon’s linear approach, slipping and rolling her shots and coming off at angles more effectively.  Shannon was facing a vastly more experienced boxer and produced an impressive performance, with plenty of potential but Whiteside won by unanimous decision.

Bowers, the taller boxer faced O’Reilly, the victor of the semi-finals.  Bowers having received the bye benefited from being fresh to the competition.  Bowers’ high guard and straight shots combined with her greater reach found the target almost at will againt O’Reilly who held a low guard to her peril.  O’Reilly received a count towards the end of the third round.  Bowers started the fourth apace, forcing two further counts; the referee took the decision to stop the contest after the last count.  Bowers took the championship belt by TKO.

A fast start from the GB boxer meant Coleburn struggled to find the target in the first round.  Coleburn tried to slip and roll but Cameron was too proficient at getting in and out of range, with snappier shots which left Coleburn flailing at times.  The Liverpool boxer started the third round positively, pushing Cameron back, spoiling and working inside but Cameron, switched on to the tactic, and kept herself behind her snappy jab and prevented Coleburn getting into range once more.  Experience won through today with a  unanimous points decision awarded to the GB boxer. 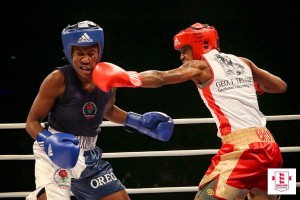 Despite both boxers hailing from London, Brown was awarded automatic entrance into the quarter finals by
virtue of her number one seeding.  Brown used the jab to good effect in the first round to keep Lungu at bay.

Brown’s tempo dropped in the second round; by waiting too long she allowed the Haringay boxer back in the fight.  Lungu gave Brown too much space in the penultimate round however, enabling her to take her time and wait for the attack.  Getting a little desperate in the final round Lungu lunged in from too far out of range playing into Brown’s hands.  The number one seed was awarded a unanimous decision.

Rowe, a relative novice to the sport with only 4 bouts faced an incredible challenge as she stood against European silver medallist Stacey Copeland.  However, for the first two rounds she made it very difficult for the international boxer, performing the basics very well and Copeland struggled to get inside the range of the taller boxer.  In the third round, however, Copeland landed a few eye catching shots which edged her the round.

Copeland continued in this vein throughout the final round piling the pressure onto the army boxer securing the last in her favour.  A close bout, with the potential for an upset but the judges saw it in Copeland’s favour by split decision.

Gale entered the ring as a recently selected GB boxer versus a relative newcomer Turbitt.  Towering over her opponent Gale was an onimous figure against the much shorter and stockier army boxer.  Gale speared in straight shots from the outset forcing Turbitt to swing shots in from out of range.  Whilst a few of Turbitts shots landed, they were no match for Gale’s power, rocking the head of the army boxer whenever she landed.  Gale got involved too much in the middle rounds allowing Turbitt to make a statement to the judges but some solid straight shots in the last round secured the inevitable unanimous victory for Gale.