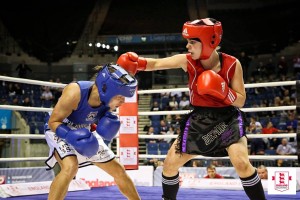 Demi Jade Retzen (New Astley) beats Jade Winfarrah (Grimsby) to reach the finalA tentative start from both boxers; each standing in front of the other exchanging single phased attacks.  Retzen upped the pace in the second round choosing well timed combinations and beating Winfarrah to the punch.

As the bout progressed Retzen grew in confidence and began to find two and three phased combinations, proving herself to be the stronger boxer.  Whilst Winfarrah was game throughout the bout and showed much potential for the future, Demi Jade won unanimously and will certainly be one to watch.

In the first round the taller Earlsfield boxer used effective footwork moving side to side, getting the better of the shorter army boxer with her long reach and straight shots. In the second round the army boxer found the target with the overhand right to good effect but struggled to get into range much of the time.  With only a handful of bouts upon entering this compeitition, the army boxer gave a good account of herself but experience reined in this bout and Dady made it clear for the judges to score and won on a unanimous decision.

Shannon started the first round with strong eye catching straight shots – snapping back the head of the Plympton boxer.  With a high workrate, Shannon continued the bout in the same vein, throwing punches in bunches and overwhelming McMullin to win on a unanimous decision.

For two relative newcomers to the England Elite Boxing Championships, O’Reiley and Hill put on a sound performance.  Whilst Hill made good use of her greater range with well timed straight shots, O’Reilly managed to find better angles, forcing her opponent to miss and then countered her efficiently.  A relatively even bout but the judges saw it in the Lynn boxer’s favour.

Cameron outclassed Nylon in this bout; the shear gulf of experience between them both proved too much for the boxer from Hebdon Bridge.  Although Hatty showed some resilience to last all four rounds, it was clear for the judges to award a unanimous points decision to Cameron.

Coleburn faced the toughest challenge of her boxing career in the semi-finals as she met Commonwealth Games international Alana Murphy in her first ABAs as a senior boxer.  The first round was a scrappy affair but despite Coleburn’s relative lack of experience she began to take charge of the bout.

Murphy threw technical straight shots but Coleburn found the angles, effectively countering the army boxer’s punches.  As the bout grew so too did Coleburn’s confidence and she was awarded a well deserved unanimous points win.

Another bout involving two boxers from either ends of the experience scale. In her first elite ABA championships Reid faced a tough test from International Brown.  Brown’s experience and class were clear from the first bell as she picked her opponent off at will; switching the attack and keeping on the edge of range.  Reid performed well but did not manage to trouble the judges in deciding unanimously that Brown was the victor.

A scrappy bout between two experienced boxers. Csejjtei, an international boxer from Hungary and Lungu, a prospect on the England interntional radar.  This was a real clash of styles with both boxers struggling to maintain their range resulting in endless clinches and unclear exchanges.  A difficult bout to score but the judges saw it in Lungu’s favour by unanimous points decision.

This semi-final provided the opportunity for a long awaitied contest between these two boxers. Copeland, a European silver medallist, was seeded number one in the championships, but Murney has been hot on her heals challenging Copeland to bouts on many occasions.

The bout did not disappoint with an impressive display of technical boxing combined with controlled aggression which was a pleasure to watch.  The judges  awarded a unanimous decision to Copeland but the bout was extremely close and Murney is most definitely a prospect for the future.

Rowe started strongly, with sound boxing basics, catching Smith with straight shots.  Whilst Smith landed shots of her own they were the less powerful and she struggled to match the army boxer’s strength.  The corner made the decision to retire Smith at the end of the second round and Rowe claimed the win by TKO(Rtd).

(Corners to be announced)