The Women’s Sport Trust (WST) has today announced that Kia Motors (UK) Ltd pioneering sponsorship deal as the official car of England women’s cricket has made the three-strong final shortlist in the “Sponsorship of the Year” category for their inaugural #BeAGameChanger Awards.

The winner of the award will be determined by an online public vote, which is open from today (April 7) until Sunday April 19.

ECB’s Head of England Women’s Cricket, Clare Connor, said: “The last 18 months have been hugely exciting for the development of the women’s cricket in England.  Alongside professional contracts being introduced for England women’s players, the sponsorship agreement signed with Kia last July is at the forefront of a period of real growth and change for the women’s game, both in this country and internationally.”

“The partnership with Kia in particular represents a significant breakthrough for both women’s cricket and women’s sport as a whole, as it demonstrates the commercial credibility and viability of the women’s game.  Major global brands want to be associated with winners, and it is fantastic that the team’s outstanding performances on the field and growing media profile resulted in the standalone Kia sponsorship deal.”

“I am now absolutely delighted that the partnership has been shortlisted for “Sponsorship of the Year” in the inaugural Women’s Sport Trust #BeAGameChanger Awards.”

The historic six-figure deal made between Kia and the ECB last July, represented the first ever standalone commercial arrangement for the England women’s team, in addition to being the biggest individual commercial partnership in the history of international women’s cricket.

Under the terms of the two-year agreement Kia is the sole title sponsor of England women’s home Test matches, and the car manufacturer has a range of sponsorship and marketing rights around the England women’s team, including in-ground activation at women’s international matches in England.

Contracted England women’s players are provided with a Kia Sportage car for the duration of the two-year sponsorship term.

The Women’s Sport Trust #BeAGameChanger Awards recognise those individuals and organisations doing the most to progress women’s sport.  They are designed to encourage action by highlighting best practice, connecting decision makers with one another and raising the profile of women’s sport. 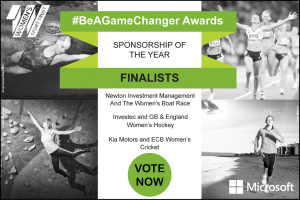