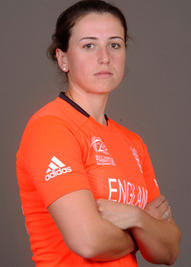 Georgia Elwiss continued her fine form with an impressive all-round display to help England Women’s Academy bounce back from yesterday’s defeat to Australia Women Shooting Stars with a 26-run victory at the International Cricket Council Academy in Dubai.

The 23-year-old followed up yesterday’s century with an unbeaten 65 off 42 balls, including nine fours and one six, before taking three wickets as EWA levelled the four-match 50-over series. 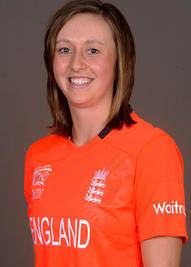 Skipper Tammy Beaumont, Evelyn Jones and Fran Wilson also struck fifties to lift EWA to 268 for nine. Beaumont and Jones set the tone with an impressive opening stand of 118 which Wilson and Elwiss built on courtesy of a fourth-wicket alliance of 114.

Elwiss then returned figures of 3-46 from eight overs to help dismiss the Shooting Stars for 240, an innings which included three run-outs.

The opening game of the series was delayed by one day because of a sandstorm and despite Georgia Elwiss’ swift hundred she could not give England Women’s Academy victory over Australia Women Shooting Stars.

Elwiss accelerated to 100 from 80 balls, striking 15 fours and two sixes, and was supported by 57 from Fran Wilson as England posted 252 all out in 45 of their 50 overs after winning the toss.

Although Natasha Farrant and Beth Langston bowled well up front for Tammy Beaumont’s side, Australia prevailed in a nip-and-tuck chase thanks to Katie Mack’s 80 and Nicola Carey’s 47 not out, winning by four wickets with seven deliveries to spare.

The third 50-over match takes place on Monday.