England Women Under 20s Head Coach Jo Yapp has named her side to take on France U20s at Esher RFC, kick off 2pm, on Saturday.

Yapp’s side were disappointed to lose out 25-0 to France on French turf last month and will be hoping for better fortunes this time around. 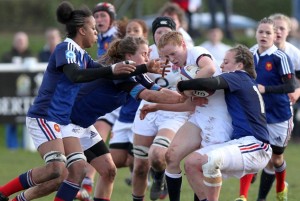 England have recalled Bristol’s Sydney Gregson, who made her senior debut for England in the Six Nations in February, at fullback with Rachel Lund moving to centre. Bristol’s Devon Holt also switches from scrum-half to wing, with Caity Mattinson returning from injury to wear the number nine shirt.


Bristol prop Abbie Parson will captain the young chargers with Rebecca Noon coming in at hooker. Amy Wigley is also given the nod to start at lock alongside Olivia Jones.

Yapp said: “We were frustrated with our performance last time out against France. We didn’t stick to our game plan fully but when we got it right we looked strong. We must put that right this weekend, especially as France are very successful in broken field play. We need to be more savvy tactically in that area. Certainly the players have learned a lot from that game so I am confident we will see progression this weekend.”