England Hockey and the European Hockey Federation are delighted to announce that the EuroHockey Championships 2015 will be broadcasted live across key European territories. The action will be played out over 10 days in front of thousands of fans on Queen Elizabeth Olympic Park in London, England from 21-30 August. 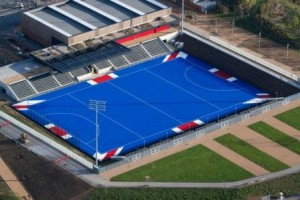 Following the recent success of the Rabobank World Cup in the Netherlands last summer the EuroHockey Championships 2015 is set to build on the ever-increasing popularity of hockey across the continent. Ahead of the tournament in August, free-to-air deals have already been confirmed in the UK [BBC], Germany [Sport 1] and Holland [NOS] and on Satellite TV in Belgium [Telenet], and with discussions taking place in Poland, Russia, Spain, Ireland, Italy, India and France, the EuroHockey Championships is likely to reach countries which have never shown the event before.

When the championships were last held in 2013 in Belgium an audience of 105m people watched the drama unfold as Germany’s men’s and women’s teams claimed the titles. With four key partnerships already in place that figure is set to be surpassed in 2015. European hockey boasts some of the best sides in the world with Netherlands, Germany, England and Belgium sitting second to fifth respectively in the World Rankings table in the men’s game and the Netherlands women hold the top spot with England and Germany also in the top 10.

England Hockey and the European Hockey Federation are passionate about inspiring more young people and adults to play hockey and broadcasting events such as the EuroHockey Championships is a great opportunity to continue to increase participation numbers across Europe. Recent figures from England Hockey show a 40% growth in young people playing hockey across clubs since the London Olympics in 2012 and the sport is thriving in countries like the Netherlands which regularly hosts international tournaments.

The European Hockey Federation’s goal is to grow the visibility of the sport across Europe and build on the positive developments for global hockey TV following the recent $250m international deal with Star Sports.

On the announcement, Angus Kirkland, Director General for the European Hockey Federation said “This is a really exciting time for hockey as we continue to grow our sport’s popularity. A key part of our drive and focus is providing top quality, entertaining hockey on TV not only for hockey lovers but for sports fans in general. The announcement today of free to air broadcasting of the EuroHockey Championships in the UK [BBC], Germany [Sport 1] and Holland [NOS] and on Satellite TV in Belgium [Telenet], is the cornerstone of this platform to ensure we showcase some of the best hockey players in the world competing for the coveted European Cup and a place at the Rio Olympics. We are very proud that we host joint Women’s and Men’s events and that both genders will be broadcast in these pan European agreements.”

The event is the perfect opportunity for sponsors looking to reach an ABC1 hockey audience and engage new fans, with the Title Sponsor opportunity for the event still vacant. Jonathan Cockcroft, Commercial Director for England Hockey: “We’re really excited about showcasing this fantastic event at our new venue on Queen Elizabeth Olympic Park to a significant European audience. Since the Olympics we have enjoyed a 40% growth in junior club participation in England and this will help continue that momentum.  What’s more, this news provides an even more attractive proposition for brands looking to associate with such a prestigious event and receive a brand platform to engage over millions of people across Europe.”