THE battle for the final play-off spot in the Investec Women’s Hockey League Premier Division will go right down to the final week of action after a nail-biting set of results on Saturday.

Currently fourth, a win at Kent rivals Canterbury would’ve seen Holcombe clinch a place at the Finals Weekend, which is being held at the Queen Elizabeth Olympic Park in London this year. But Mel Clewlow’s 18th minute goal from a penalty corner proved enough to give Canterbury the win and move them up to second, while Holcombe remain fourth by a narrow margin.

The University of Birmingham are still in the play-off race after drawing 1-1 with Clifton. Aileen Davis had given the Bristol side the lead on 22 minutes, but Hannah Martin struck in the 47th minute for the visitors. 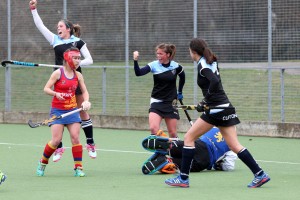 Reading could still also be heading for London after winning 2-0 at Buckingham, with Georgie Blackwood and Kate Richardson-Walsh scoring their goals in the first half.

Leaders Surbiton continued their good form as they travelled to Bowdon Hightown to record a 4-2 victory. Emily Atkinson was Surbiton’s stand out performer as she netted a brace in the 21st minute, whilst Bowdon Hightown’s goals both came from Holly Hunt in the 55th and 67th minutes.

And relegated Beeston ended Leicester’s play-off hopes when they beat them 3-2 with goals from Phoebe Richards, Hannah Wraith and Erica Sanders.

Bottom of the table Cheltenham found their form too late as they beat league leaders Slough 2-1 in the Women’s Investec Conference West. A penalty corner from Gayle Pearce after 15 minutes and another on 62 minutes by Emily Mitchem sealed the victory for Cheltenham, despite an equaliser on 60 minutes by Josephine Brackenhoff for Slough.

Stourport and Trojans played out a thrilling 4-4 draw. Stourport’s Claire Pearson scored on 13 and 21 minutes, while Trojans’ Kewley Mccaskill scored on 10 and 14 minutes

Sutton Coldfield managed a comfortable 4-0 victory at home to close league rivals Brooklands Poynton, and move to within three points of second place. The hosts went in 1-0 at half-time thanks to a penalty corner from Vicky Woolford in the 15th minute. A second half brace from Jane Sixsmith and another from Bethan Merriman rounded off a comfortable victory.

Champions Wakefield recorded a 4-3 victory over Loughborough Students despite the efforts of Loughborough’s Ellie Tait who scored a hat-trick to round off a good performance.

Elsewhere, Ben Rhydding won 2-1 at the University of Durham, Kendal beat rivals Liverpool Sefton 2-1 to avoid relegation play-offs, and Whitley Bay and Tynemouth won 1-0 at bottom of the league Cannock.

Harleston Magpies moved into second place on goal difference with one game remaining as they defeated league rivals Sevenoaks 3-1 away from home. Charlotte Harrison, Maria Andrews and Emma-Lee-Smith were the goals scorers for Harleston as they took a comfortable 3-0 victory before half time. Jet Van Zalen scored a penalty corner in the 47th minute but it proved too little.

League leaders East Grinstead continued their dominance as they recorded a comfortable 4-1 victory over struggling Bedford, who are now only two points off the bottom of the table. Heather Batten led the scoring for East Grinstead by hitting a brace.

St Albans were 2-0 winners at home against Horsham, while Maidenhead won 3-1 against Ipswich and Wimbledon were 1-0 victors at Chelmsford.