England Women got back to winning ways with an eight-try Six Nations victory over Scotland in front of 7,620 fans at the Northern Echo Arena in Darlington on Friday night.

After defeat to Ireland two weeks ago in Ashbourne, the world champions were in more convincing form against Scotland and set the tempo early on.

England made the perfect start with a try within the first minute. Skipper Katy Mclean opened up the midfield with Ceri Large, Fiona Pocock and Lydia Thompson on the attack before wing Ruth Laybourn finished off the move to score in front of her home crowd.

Mclean couldn’t make the conversion and Scotland clawed back to a 5-3 deficit with a Nuala Deans penalty before England ran in try number two. This time it was the turn of another Mowden Park player, vice-captain Tamara Taylor, who muscled her way over after a nicely floated Mclean pass. 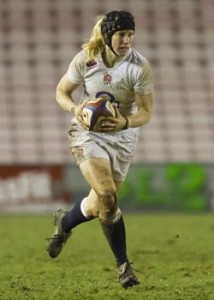 Player of the match – Tamara Taylor

England, however, were penalised for some careless errors in the first half, and fly-half Lisa Martin added three points when the home side were punished for not rolling away, making the score 10-6.

Just before half-time, England made it 20-6 with a try from prop Justine Lucas, who . muscled her way over from close range, after a solid line-out, before fellow prop Rochelle Clark (who was earning her 99th cap) claimed England’s fourth try.

After the break, England were in control but slippery conditions hampered the run of play. In the end though they made it count when scrum-half Bianca Blackburn recycled the ball out to Harriet Millar-Mills and then Pocock, waiting on the wing, dotted it down to score in her first game for two years.

Scotland hit back, taking a soft intercept try from England with Eilidh Sinclair scoring. Deans added the conversion to reduce the deficit to 25-13 but England soon started to find their stride again running in a further three tries.

Laybourn added her second on 56 minutes after Mclean made  a good break. Wing Thompson, playing in her first game since the Rugby World Cup, then made a good break to run in relatively unopposed before Laybourn made it a hat-trick of tries in the dying minutes of the game.

England Acting Head Coach Nicola Ponsford said: “We set out to win this game but we also wanted to focus on our performance. In some areas we performed well but in other areas we weren’t up to the standard that we wanted to be at, like our penalty count for example. We also made too many errors and that was a little disappointing.”

“In the second half, we settled into the patterns we wanted to play and built some really good phases of play. We scored some good tries which was great to see. We are progressing as a new team, the new players are finding their feet and generally our defense has been good. We had a great crowd here tonight and we are now looking forward to being back at Twickenham on Saturday when we play France.”

Substitutions: Davidson for Blackburn (15), Blackburn for Davidson (21), Reed for Brown, Cokayne for Fleetwood, Cornborough for Clark (all HT),