4TLOS were delighted to be invited to RAF Cosford to watch the RAF take on the Navy in the Inter Services Championship.  We will be receiving an official match report but here is our unofficial effort together with a few photos of the match.  The RAF eventually won 4-0 in a hard fought contest which, as you would expect from two branches of our armed services, was played with total commitment and without compromise.

During the first half the match was very even with chances falling to both sides.  In the early stages of the match the Navy were awarded a free kick for handball right in front of goal which was sadly wasted and came moments after a dangerous corner kick sailed through the penalty area. 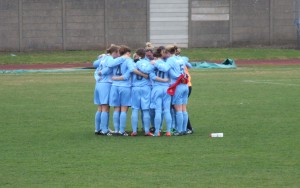 RAF had a lovely chance to open the scoring when a header forced a fantastic save from the keeper.  The half time score of 0-0 was a fair reflection of the game, which was being played out in bitter cold weather with a gusty wind and occasional showers – none of which dampened the enthusiasm or commitment on the pitch.

In the second half the Navy started brightly but quickly began to tire, despite a raft of substitutions.  The breakthrough came on 60′ through RAF’s SAC Haywood, who was oustanding throughout the match.  Fifteen minutes later the RAF sealed the match with a great score from captain Cpl Zara McIntosh – a player with deceptive speed who really covered a lot of territory showing at times great pace.

A couple of injuries marred proceedings slightly with goalscorer SAC Haywood having to be helped off the pitch after what looked like a knee injury.  Shortly afterwards a clash of heads appeared to knock out Navy’s central defender, AB Nat Collier, after several minutes attention she was not only back on her feet but back on the pitch, showing no ill effects of the blow. We hope they will both be fine and able to face the Army in their respective matches.

The third goal was really quite special, when it appeared that the chance was gone the quite outstanding SAC Jade Ellis-Johnson struck with a back heel flick that took everyone by surprise.  A cracking goal – do hope someone got it on video! 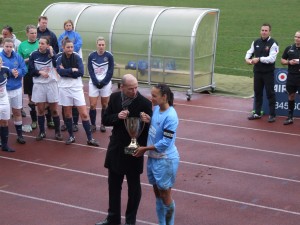 The last word of the tie fell to the indomitable captain who hit the back of the net after her first shot had been parried by the keeper.  It all made for a miserable afternoon for the Navy who had worked hard but tired badly.

Both teams go on to face the Army: the RAF play the Army at their home ground Aldershot on the 18th March and then the final tie will be at Fratton Park where the Army will take on the Navy on 25th March.