England Hockey is delighted to announce its latest figures revealing that Club Hockey participation amongst under 16’s has grown by 40% since 2011. Overall participation in clubs is also up 16% on 2011 as hockey clubs continue to welcome new members every year.

The inspiration of hockey’s successful teams at London 2012, where the women’s team won a bronze medal and 630,000 watched the hockey on Queen Elizabeth Olympic Park, was linked to the Hockey Nation campaign run by Great Britain and England Hockey that gave tens of thousands of people a chance to play during the Games. This has developed into a legacy of continued growth.

Hockey clubs have reaped the rewards of the improved profile of the sport, focusing on a link with schools to provide excellent opportunities for young players. Programmes such as Quicksticks – a small-sided version of hockey for 7-11 year olds – in Primary Schools have also been hugely successful in allowing new players to take part in the sport from an early age. There are other adapted formats which make the game accessible whatever the age or circumstances of the participant. Click here for more information. 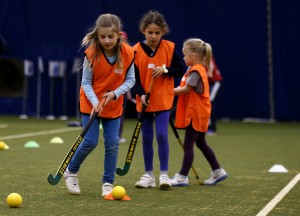 Hockey is a sport for everyone, of all ages, with both an even split in genders and players of any ability taking part. The recent growth has also been driven by women who were inspired by the Women’s National team and have been embraced by clubs, whether they are young players new to the sport, or adults returning through England Hockey’s extremely successful Back to Hockey initiative. Club membership is now split evenly 50% male and 50% female whilst international teams compete side by side in international tournaments – something few sports can boast.

Sally Munday, Chief Executive of England Hockey said: ‘We are so proud of our clubs who have created more and more opportunities for people to take part in the sport and latest figures are testament to their commitment and capability. As a National Governing Body we are working hard to raise the profile of the sport and use the visibility of our successful teams and athletes to grow the game.”

“This is just the start with the four years ahead providing an exciting opportunity to further increase the momentum. We are hosting the European Championships in August this year and have two other major events leading up to the Women’s World Cup in 2018 all on home soil. We hope these will continue to give the platform for continued growth.”

As the driving force behind the boost in numbers there are some fantastic stories around increased memberships at hockey clubs across the country. London Wayfarers Hockey Club did not have a junior programme in 2010 and after starting up their junior section four years ago they now have just under 400 U18s signed up. It’s a similar story of success for Bromsgrove and Formby Hockey Clubs; Bromsgrove’s junior programme has 238 junior members and Formby has more than tripled the size of its junior section from 111 to 342 members since 2011.

Matthew Dean, Junior Section Captain at London Wayfarers, said: “We’ve now got nearly 400 young people taking part in hockey and our junior membership is thriving. I think the increase in numbers over the last four years is down to a couple of things; more schools in our area are playing hockey and I think the increased exposure of the sport at a national level is having an impact on the number of people who want to pick up a stick and start playing. We’ve worked closely with our local schools to make sure the right signposting is in place as it’s vital to provide that link from school to club.”

Hockey’s visibility and legacy from 2012 is further cemented by its legacy stadium on Queen Elizabeth Olympic Park – Lee Valley Hockey and Tennis Centre – which opened in May last year and which England Hockey will be using to host major international and club events in the years to come, including the EuroHockey Championships 2015 this summer.

[England Hockey’s strategy is based around a ‘virtuous circle’ where international success drives the visibility of the sport, which fuels a growth in participation. This then feeds back into creating international success via the talent pathways in junior hockey, and so the virtuous circle continues. The growth in junior membership is evidence of this virtuous circle in action, and this has also provided a platform for England Hockey’s commercial growth, with many more spectators attending its events, and increased opportunities for sponsors.]

Hockey invited people to ‘be part of it’ during the Olympics in 2012 – and the latest figures show increasing numbers are doing that every year.