Clinical finishing saw the Lionesses overcome Portsmouth Ladies to book their place in Round 5 of this season’s FA Cup. The FA Women’s Premier League side were a tough match for Millwall but a sensational hat-trick from Lillie Billson, combined with Frankie Strugnell’s late free-kick finish, secured an impressive away win against the high-flying South Coast club.

Manager Dan Mlinar kept faith with the side that started the recent pre-season friendly with Arsenal, handing goalkeeper Frankie Gibbs her first competitive start of the season, while midfielder Lilly Maple made her return from injury on the substitute’s bench.

The match got off to an even start with both sides enjoying plenty of possession, although the hosts edged the better of the goalmouth chances. Millwall’s defenders did well to close down an early opening for Pompey’s Chloe Dark, while a brace of early corners from Lucy Quinn and Charley Wilson came to nothing for the home side.

By contrast the Lionesses took the lead with their first chance of the match on 14 minutes, Rinsola Babajide springing the offside trap before setting up Lillie Billson to curl a shot beyond keeper Sadie Blakely. 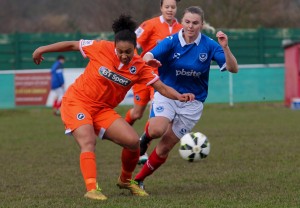 Portsmouth were unlucky not to level soon after as Frankie Gibbs cleared Jessica Frampton’s corner via her own crossbar and the hosts were left to rue the missed opportunity moments later. This time, Lily Agg was the provider with a defence splitting through ball that allowed Billson the space to slot home her second of the match and give Millwall a 22nd minute two goal advantage.

Babajide was denied a third eleven minutes later as Blakely saved well against the young winger in a one on one, before Portsmouth equalised six minutes before the break. Gemma-Louise Hiller collected the ball in midfield and made herself space before firing home from 25 yards out.

The hosts finished the half strongly with Hillier firing over and Gibbs saving well to keep out Wilson’s late volley and preserve Millwall’s 2-1 lead at half time.

The second half began in equally competitive fashion and it was Millwall that got the early breakthrough again as Billson completed her hat-trick with a stunning 30 yard drive on 50 minutes.

However, Pompey refused to lie down and came agonisingly close to reducing the deficit six minutes later as sub Sarah Kempson’s free-kick was headed just over the bar by Wilson. Former Lioness Leeta Rutherford did find the net for the hosts on 68 minutes but her effort was ruled out for an injury to Lily Agg who left the field shortly after on a stretcher. She was replaced by Lilly Maple, while Mlinar also introduced Shirvae Edwards to the help shore up the midfield for the closing stages.

Indeed, Edwards almost extended Millwall’s lead on 88 minutes but sadly she was unable to find the target from Naomi Cole’s outstanding cross. The Lionesses wrapped up the win in time added on as full-back Frankie Strugnell found the net with a 20-yard shot that came off the post and keeper before finding it’s way over the line.

Moments later at the opposite end Gibbs produced another top draw save to keep out Kempson’s last gasp effort.
The win puts the Lionesses into the draw for FA Cup Round 5 which is when all the WSL 1 sides enter the competition.