BATTLING Beeston were relegated from the Investec Women’s Hockey League Premier Division after a 2-0 defeat at the hands of the University of Birmingham on Saturday. 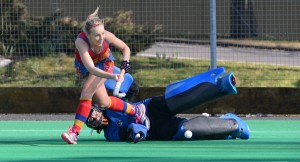 Unbeaten Surbiton had long since guaranteed their place at April’s play-offs at the Lee Valley Hockey and Tennis Centre at the Queen Elizabeth Olympic Park in London.

However, they faced second-placed Clifton in what was one of their biggest challenges of the season. It was a test they passed with flying colours, as goals from Sarah Page and Jenna Woolven saw them win 2-0.

Canterbury moved up to second and dented Leicester’s hopes of a play-off berth by beating them 5-1. Eliza Brett hit a brace and there were further goals from Dirkie Chamberlain, Grace Balsdon and Lizzie Neal.

Bowdon Hightown moved out of the relegation zone at the expense of Buckingham, beating their fellow strugglers 1-0 thanks to a goal from Lisa-Emma Crewe.

Play-off rivals Holcombe and Reading fought out a goalless draw, leaving both sides still in with a chance of reaching the play-offs – although Holcombe are still fourth and in the driving seat.

Slough were presented with their trophy for winning the Investec Conference West championship after a 2-0 win against Olton and West Warwicks.

The champions had to wait until the 62nd minute for a breakthrough with Mel Ball forcing the ball home. Charlie Brydon added a second from a penalty corner just three minutes later. The defeat leaves Olton just three points above the relegation zone.

Cheltenham’s relegation was confirmed as they lost 4-1 to Isca. Emily Mitchem gave them a glimmer of hope, giving them the lead on 32 minutes but a Meg Crowson hat-trick saw Isca win comfortably.

Wakefield all but confirmed their place in the Investec Conference North promotion play-offs with a 2-1 win at second place Brooklands Poynton.

Sally Walton and Cat Horn scored the goals to open up a six-point gap at the top, as Brooklands missed the chance to claw themselves to within touching distance of the league leaders.

Kendal took a giant step towards safety with a narrow 2-0 win over Whitley Bay and Tynemouth, a result which moves them into eighth place after Liverpool Sefton were beaten by the University of Durham, losing 3-0.

Cannock’s survival hopes are looking increasingly slim after they were despatched 8-0 by Sutton Coldfield.

Horsham were beaten 1-0 by Harleston Magpies in the Investec Conference East, meaning their only hope of survival would be via the relegation play-offs.

Lucy Whiting’s early goal condemned Horsham to defeat and left eighth place out of their reach, after Ipswich won 3-1 at Bedford to strengthen their chances of survival.

That defeat leaves Bedford also likely to feature in the relegation equation, with victory for Ipswich opening up a five-point gap at the bottom with just two games to play.

Elsewhere Chelmsford lost 1-0 to Sevenoaks to leave them with work still to do to ensure survival, whilst Wimbledon moved into fourth with a 1-0 win over St Albans.