Man of the match Kate Cross took a personal best 5 wickets for just 24 runs as England restricted New Zealand to 168. 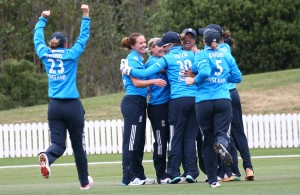 In response Sarah Taylor (89 not out) and Captain Charlotte Edwards (64 not out) smoothly guided the team to victory. England beat New Zealand by nine wickets. They level the one-day series at 2-2 with one match remaining, despite losing opener Heather Knight for just 5 runs.  The win came with 17.5 overs to spare and sets up an enticing deciding match on Saturday.

Speaking after the match Cross said that she wanted to make a bit of an impression having been left out of some of the earlier matches.  This was her first man of the match and first ‘5 for’ for England so a special day indeed and quite an impression.

Cross was also full of praise for team-mates Taylor and Edwards saying: “It’s pretty special when those two get going and both of them were absolutely outstanding,” she added. “Sarah Taylor played an absolute blinder and a few people that have watched this will say that was one of her best innings.” 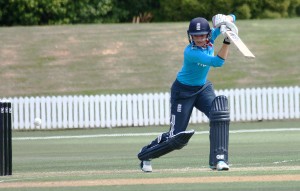 It was a fine all round bowling display from England with Rebecca Grundy taking 3 for 36.