It was no fairytale half-century for Charlotte Edwards in her 200th game as captain of England, but it was a victory by five wickets as England chased down the White Ferns’ score of 97 for nine with eight balls to spare.

It was Edwards’ 60th Twenty20 international victory as captain in the 82 games she has played.

And it was the victory, which sealed the T20 series 2-1, was what mattered to the England captain, who always puts the team above her own personal performance.

“I know there was a lot of hype around my 200th game, but very much within our dressing room it was about us winning this series,” Edwards said.

When asked about her own low score of five today, she said: “I dragged one on, but it was not about me today it was about the team and winning another series. It’s a huge honour to get this milestone, but the win was the most important thing.”

England had bowled well having won the toss and put the New Zealanders into bat. Once again, Heather Knight’s miserly off-spin set the tone for the Kiwis’ under-par innings. 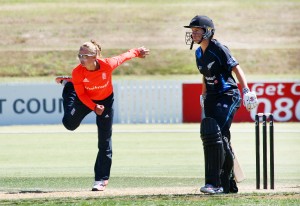 She bowled her four overs straight off at the start of the White Ferns’ innings and returned figures of 2-14. She picked up the key wicket of Suzie Bates in her second over as she lofted a drive to Lydia Greenway on the boundary at wide mid-wicket. In her next, Knight had Sara McGlashan caught by Amy Jones at mid-off when driving loosely, and New Zealand were 24 for two.

Fellow off-spinner Dani Hazell became England’s leading T20 wicket-taker, with 64 wickets, when she had Rachel Priest well caught by Greenway on the deep mid-wicket boundary in the eighth over of the innings, to leave the Kiwis on 30 for three.

With Bates and Priest gone, it was left to Sophie Devine to try and lead a response from New Zealand. She batted well for 37 off 31 balls, but lost partners at regular intervals at the other end. 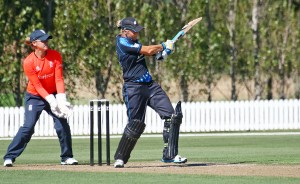 Kate Broadmore clipped Laura Marsh to Knight at mid-wicket and Katie Perkins dabbed Katherine Brunt to Edwards, as the Kiwis found it hard to make any headway against the tight England bowling and fielding.

Hazell, who finished on 2-15, then claimed her 65th T20 victim, as Anna Peterson was adjudged lbw, while England’s third off-spinner, Marsh, took her figures to 2-24 as she had Erin Bermingham neatly taken by Wyatt at extra cover.

With two overs to go, New Zealand were 94 for seven but Devine was still ploughing a lone furrow and was New Zealand’s only real hope of making it past 100. The combination of Jenny Gunn and Jones made sure it did not happen, with Jones snaffling a great low catch at mid-off to send Devine on her way. In the same over, Leah Tahuhu drove Gunn to Knight with the White Ferns still on 96, and they could add only one in the last over as Brunt finished the England bowling effort in style.

With Winfield out injured it was Knight who walked out to the crease with her captain to open for England. She looked in a positive mood after her quickfire 30 in the last T20, although she was perilously close to being run out in the first over as she came back for a second run.

She lost her skipper in the fourth over when Edwards chopped on a short ball from Tahuhu to depart for five. Knight and Taylor took the score on to 44 without too many alarms until Knight clipped a leg side half-volley down to Peterson at deep fine-leg to go for 26 off 27 balls. 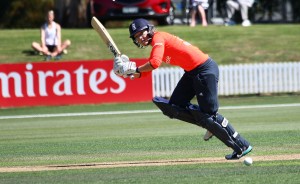 When Taylor lofted a drive off Tahuhu to Bates at mid-off, England were 55 for three, and just showing some nervous signs.

However, Greenway and Natalie Sciver played sensible cricket and ran well together, and took England close to victory before they were both out. Sciver was unluckily run out for 16 at the bowler’s end as Bermingham deflected a hard-hit Greenway drive onto the stumps, and Greenway herself was bowled going back to a full ball from Georgia Guy for a well-made 25.

England still needed five to win and they kept their supporters on the edge of their seats after a quick-run single, as they played out six dot balls.

However, Brunt heaved the fourth ball of the penultimate over to the midwicket boundary for the only six of the England innings, which wrapped up the series for the visitors 2-1.

England women won the toss and elected to field