England women’s captain Charlotte Edwards has last night led her country for the 200th time in international cricket.  Edwards officially took over the captaincy from former England team-mate, captain and now the ECB’s Head of England Women’s Cricket, Clare Connor in 2006.  Since then, she has hardly missed an international match, leading England in nine Tests, 109 One Day Internationals, and following the conclusion of the match against New Zealand in Lincoln today, 82 Twenty20 Internationals. 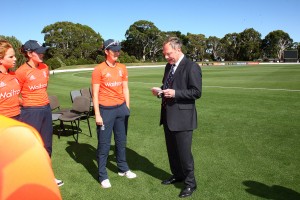 The feat confirms her status as the doyenne of the global women’s game, and makes Edwards the most experienced international women’s captain of all-time – Merissa Aguilleira is next on the list, currently with 137 caps in charge of the West Indies.

Speaking ahead of the match against New Zealand, Charlotte Edwards said: “It’s going to be a very proud moment for me and I am hugely honoured to have led my country in so many matches.  I still remember going out for the coin toss for the first time as England captain, and whilst it feels like a lifetime ago, I still have the same enthusiasm and passion for the game now as I did back then.” 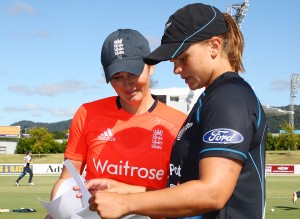 “In 200 matches there are of course a few highlights, but I think winning the ICC Women’s World Cup in Australia in 2009 was something that was always a career ambition as a player, so to do it as captain was extra special.  Equally, the double Women’s Ashes wins in 2013 and 2014 will always be very memorable for me.”

“Everything I do on the field is underpinned by my enjoyment and passion for cricket, and hopefully that has come across to all of the players that I have played with over the years.  I love what I do – I love captaining England and to have done it so many times makes me extremely happy and proud.”

Managing Director of England Cricket, Paul Downton, who was watching at the Bert Sutcliffe Oval yesterday, said: “I am absolutely delighted to have been able to watch Charlotte’s 200th match as captain of the England women’s team today.  It is an extraordinary achievement and one which everyone at the ECB is very proud of.  She is an inspiration to female cricketers around the world, and continues to set the standard for everyone else to follow.”

Clare Connor has also passed on her congratulations: “The beauty of Charlotte’s career, as an England player and as England captain, has been her unrelenting desire to be better.  Even on this momentous day for her, I know that she will be striving to be better than she was yesterday, for her team.  This is a rare, admirable and wonderful quality and it is qualities such as this which set world class players apart from very good players.  I’m immensely proud of Charlotte, as her former England team-mate, as Head of Women’s Cricket, and as her friend.  What she has given to England women’s cricket cannot be quantified in numbers.  She is without question, the most successful England captain, male or female, across sport in our country.”

England went on to win last nights T20 by 5 wickets and also took the Series.  Match report to follow.  Business as usual for Captain Charlotte Edwards and her team.