Both Thurrock and Waterloo having won their respective Leagues 2 years running were desperate for Premiership Rugby. The game took place at the neutral venue of Broadstreet RFC in Coventry with both teams noisily supported by travelling fans. 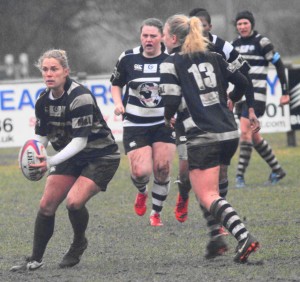 rugby, but despite the errors, it was played with such intensity and physicality it  delivered an absolutely classic game of a different type.

It was very much a game of 2 halves and Thurrock T-Birds ultimately coped better with the truly awful conditions and executed a game plan that leaves them one game away from Premiership Rugby.

Despite choosing to play into the strong wind, Thurrock showed the threat of World Cup winners Rachael Burford linking with Kay Wilson early on, collecting the ball almost on her own line Wilson  was finally dragged down by a despairing Waterloo tackler well past half way, but it might well have been this threat that restricted Waterloo’s kicking game in the first half. 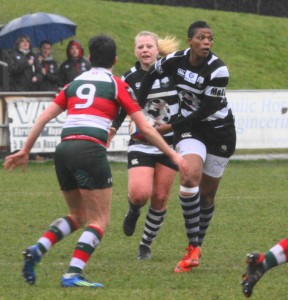 Despite the conditions Thurrock tried to bring their fast paced A game, running everything, offloading and opting for the quick tap from scrum half Cook at every opportunity.  World Cup winner Heather Fisher, returning after a long injury break was everywhere.  Her chase of a kick through from Zaza Nojoko on 10 minutes allowed India Harvey the time to collect the loose ball, beat one defender and drag 2 tacklers over the line for the first score.

The next 15 minutes were all Thurrock, the pack in the shape of Jonga, Nichols, French, Jordan and Phelps carrying hard through the midfield which set up moves that allowed Wilson and Corales to both be just dragged down short of the line.  Everything was happening within reach of the Waterloo try line and it looked as though Thurrock would eventually get another score.

However, Waterloo had other ideas.  From a dropped Thurrock ball inside the Waterloo 22, they set off on their own attack.  Thurrock were unable to turn their narrow attack into wide defence in time and isolated defenders dropped off tackles to allow Waterloo to score, the conversion putting Waterloo ahead 7-5.

Thurrock dominated the next 10 minutes in terms of territory and possession, setting up camp in Waterloo’s 22. With Phelps held up over the line, it was always just a matter of time until the next Thurrock score, with Heather Fisher showing incredible pace for a No8 and again dragging 2 tacklers with her over the line.

Determined to get back in the game, Waterloo pressed from the kick off and 2 poor kicks from Thurrock into the strong wind allowed them some time and space on the ball.  T’s aggressive defence drove Waterloo back again and again and with the clock ticking, Waterloo opted for an easy kick at goal to get something before half time.

The successful penalty left the game evenly balance at 10-10 at half time with both side believing that a win was in their grasp.

Now with the ever increasing wind and driving rain at their backs the T-Birds came out for the second half with a really simple game plan, play in their half! 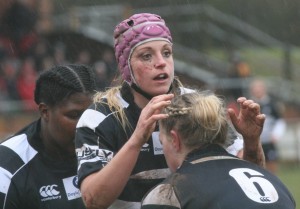 Pressing for the win and a little over enthusiastic at the breakdown, despite being camped around the Waterloo 22 Ts started to concede too many penalties, but Waterloo unable or unwilling to kick into the wind, tried to run
everything and mostly failed to make much ground before the boot of Nojoko pinned them back in their own 22.

Finally after the pack threatening the line in midfield Ts went wide for Harvey, Corales, Francis and Wilson to link up, allowing Wilson over in the corner for 15-10.

Waterloo never gave up and defended desperately, but Ts were now dominating almost every area of the game and constantly threatening another score. 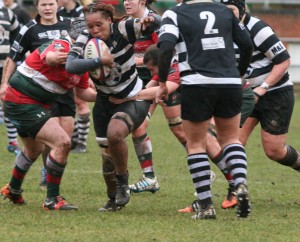 Mountjoy, Phelps, French and Vazi were all held up over the line in a 5 minute period before Lalla Vazi finally nailed the last and vital score of the game for 20-10.

Pinned back in their own 22 and needing 3 scores in 10 minutes, the game was over for Waterloo.