Jets had started the season well, with their star signing Lottysha Cato the top shooter in the Superleague so far.  But Thunder’s defence has been solid and will have been feeling capable of keeping out the Grenadian shooter in this highly anticipated Roses clash.

A hostile partisan crowd met Thunder from the first centre pass to the last. Jets came out all guns blazing ripping through Thunder’s centre play, who were seemingly caught off -guard by Jets’ strong start.

Laura Malcolm called a time out with an injury to her finger, giving Thunder vital time to regroup and find and answer the Jets’ dominance in the opening five minutes. But despite their excessive time in possession, they failed to stretch further than one turnover ahead.

It was however uncharted territory for the Black and Yellows this season, having not fallen behind by more than one in their opening three games. And before Jets knew it, Thunder were back on level terms, and surging ahead, scoring seven without reply. A loose pass from Pitman handed Jets possession and it was 11-12 at the end of the first. 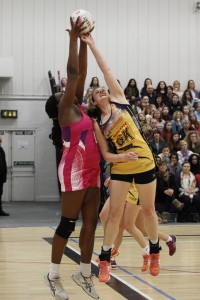 In-form Housby, who netted 100 per cent of her shots, moved to shooter and Kathryn Turner switched to goal attack were the only Thunder changes at the break. The second was a more cagey affair, with both teams cutting down on what became an error-strewn first quarter.

A cheeky dummy shot from Housby is not rewarded with a miss from Turner and Jets take it down the other end to even the score. Turner’s weak lofted pass was then intercepted and Jets sneaked into the lead.

Jets keeper Tuaine Keenan forced Housby into a number of long shots, but the young England shooter demonstrated her versatility in scoring them.

Coach Tracey Neville, clearly not happy with her team’s first half performance, rang the changes, bringing on Jodie Gibson at goal defence and Ellie Cardwell at goal attack. Neville opted to keep the faith with Chelsea Pitman, who had not managed to force her way into the game in the first half.

A nasty collision between Cardwell and Lauren Potter left the latter a little shaken but the Thunder shooter shrugged it off, slotting in an attempt seconds later. Thunder found some rhythm that has escaped them since midway through the first and edged into a four-goal lead.

A firework pass from Malcolm drew loud cheers from the travelling support, as the home crowd fell silent for the first time in the match. Almond was starting to get the hang of marking Cato, intercepting a handful of limp feeds from Jets.

Thunder continued to press, not resting on their four-goal lead but Jets stayed in touch, coming up with some textbook attacking playing of their own. The pace was exhilarating in the closing moments but Thunder held on to clinch a physical tie against their Yorkshire rivals.

Player of the match Helen Housby said after the game: “I am so pleased with that. There’s always things I can improve, I think today I got a little bit stuck on the baseline so I will look to work on that.”

“I think Kerry (Almond) did a great job with Cato and I she is the only keeper that can produce interceptions like that. She is the best keeper in the league. It is always tough coming to Leeds and credit to the girls for holding on as it would have been easy to step off the gas but we dug deep .”

Ellie Cardwell added: “It was tough to come on at half time but I think I brought a different option in that shooting circle. We were patient even when they kept coming back at us. “It’s always tough playing a derby game and it was pretty physical out there.”